If you’ve collected gold sovereigns for long enough, chances are you’ve encountered a fake sovereign or two. Like their real counterparts, these fake coins resemble the real thing: They often bear Benedetto Pistrucci’s rendition of St George slaying the dragon on the reverse and have Queen Victoria, King Edward VII, or King George V on the obverse. They are generally the correct size (21.5mm in diameter) and thickness, and usually weigh around eight grams, just like the real thing. They are also gold-coloured and may even be genuine 22 karat gold. So as these fake sovereigns resemble real gold sovereigns so closely, how can a collector distinguish between the two? 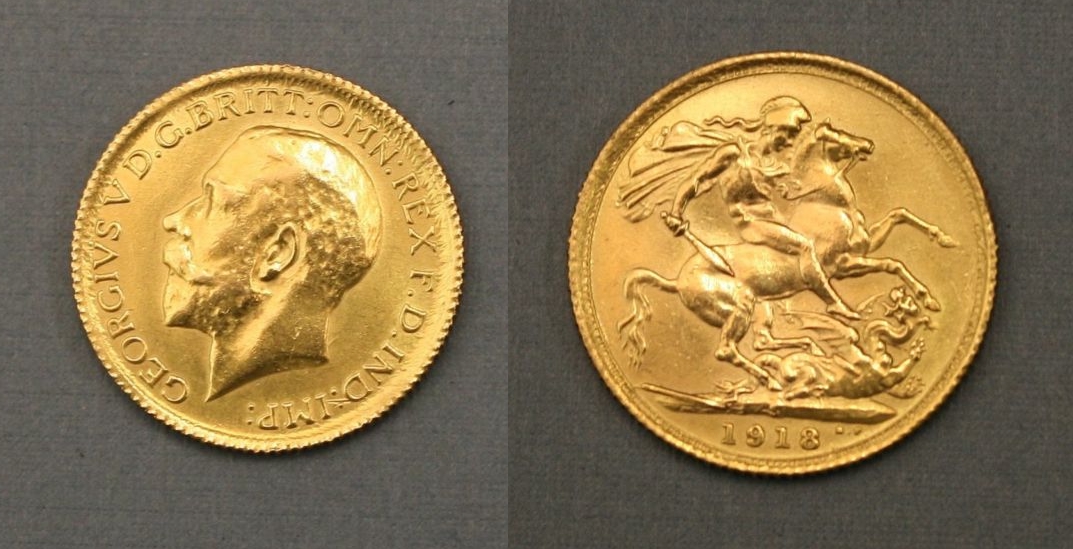 An image of a fake 1918 India sovereign sighted on Ebay in April 2013. The seller did not describe it as fake.

Where do fake sovereigns come from?

Not all fake sovereigns are created equal. The types of fake sovereigns that are seen most often in the coin market (particularly on online auction websites such as EBay) are supposedly made in the Middle East and India. (I use the word supposedly because nobody really seems to know where these fakes come from. I have found fakes in the Continental Europe, the UK, and Australia, and have seen them selling in virtually every country in the world with its own EBay domain name.) It is assumed that these fake sovereigns are manufactured for use in jewellery and gold trade in countries where genuine gold sovereigns are difficult to source (because of import restrictions, foreign gold coin ownership restrictions, and so on). Fake Middle Eastern or Indian sovereigns are generally made from high-quality gold (usually 22 karat) and are sometimes alloyed with silver instead of gold (ironically making them marginally more valuable than genuine low grade sovereigns issued by the Royal Mint). This type of fake sovereign is no doubt still in production today. The second type of fake sovereign is more correctly described as a counterfeit. These “coins” were manufactured before the 1930s and well into the 19thcentury when gold sovereigns were still in circulation. Counterfeiters fabricated these fakes with the intention of passing them off as the genuine article, so it was important that these counterfeits contain very little valuable gold. As a result, they were often underweight, off-colour, and overall crude in appearance. I won’t talk much about these counterfeits because they’re generally of poor quality and are not difficult to distinguish from a genuine gold sovereign.

An article from the Argus newspaper, 18th January 1895, warning the public about two counterfeit sovereigns found by a bank. Click the image to enlarge.

How to spot a fake sovereign

I’m often asked by collectors how to determine whether a gold sovereign is genuine or not. This is not an easy question to answer on the spot, because to simply say you need a years of experience and trustworthy instinct is not very helpful. Sadly, the fact is that it really does take a bit of specialised knowledge and familiarity with the real deal, as well as an eye-for-detail, to pick the subtle differences between a real sovereign and a fake one. However, if you don’t have two or three years to learn the ins and outs of the sovereign market, there are still some things you can do to give you an idea about the authenticity of a suspect sovereign. 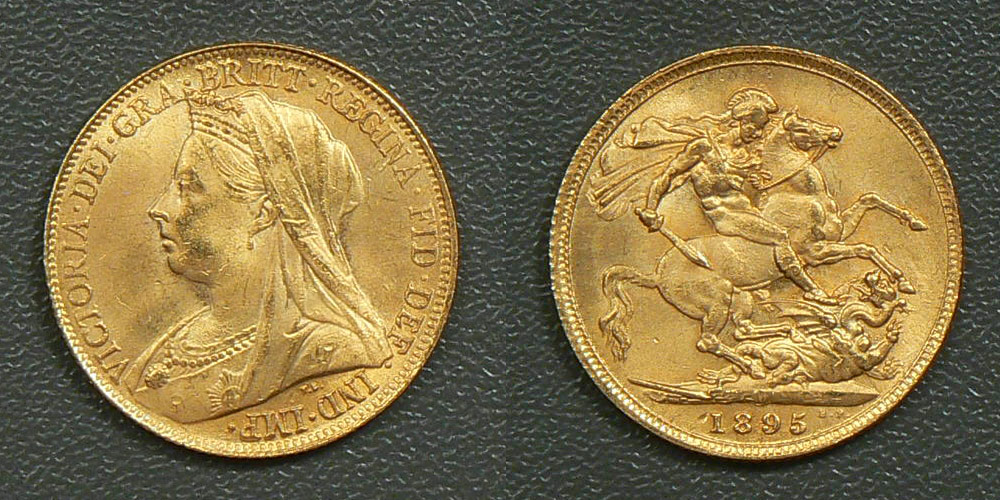 A rather good counterfeit 1895 Melbourne Sovereign. Notice the badly-formed legend on the obverse.

Firstly, after the suspect coin has passed weight and XRF scan tests, take a close look at the coin’s overall appearance. Ask yourself whether the coin’s looks “ok”. This is going to be a little hit-and-miss for anyone without much experience in gold sovereigns, but collectors who have seen more than a couple of genuine sovereigns will likely notice something here. Also check that the reverse and obverse pairing is accurate: Occasionally, a fake sovereign will have an obverse and reverse combination that is not possible, such as an 1896-dated reverse and a Jubilee head obverse. The next step is to examine the coin close-up. Use a 10x magnifier, and then a 20x one. What you’re looking for are any signs of imperfections. I’m not talking about wear, here; I’m referring specifically to a lack of sharpness or fuzziness in the design, porosity in the fields, roundness about the corners of the serifs of the legends, and unusual die cracks or other marks. Examine the coin’s milling to look for what might appear to be a line or crack that runs perpendicular the milling. This could indicate that the coin was cast, the lines being where the two sides of the cast came together. Now, the presence of any of these indicators does not mean with one hundred percent certainly that you have a fake or counterfeit—they are simply indicators. 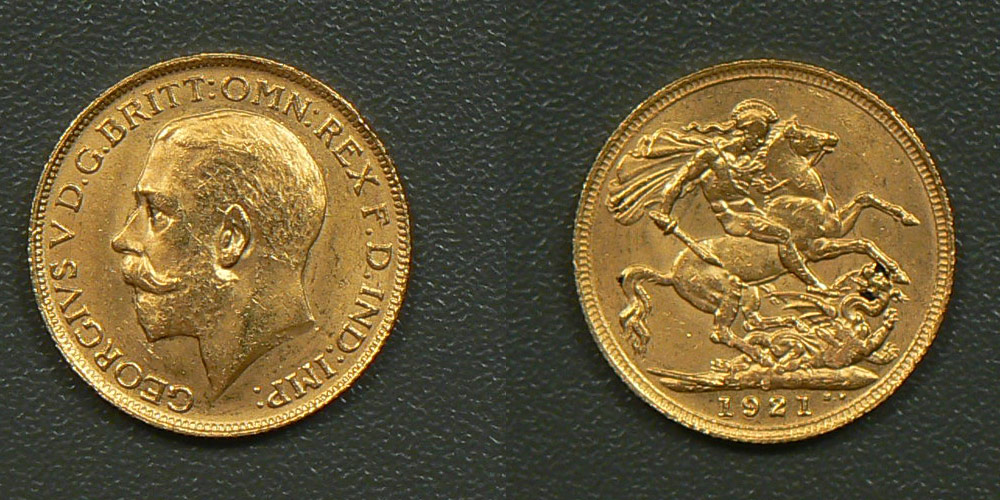 A rare 1921-S Sovereign - or is it? This coin came back in a PCGS body-bag for "Questionable authenticity".

The design itself will be different. There will be small variations in the shape, contours, and outlines of various details of the design. For example, the face of St George might be more round or flat, or perhaps the blade of his sword is too narrow or broad. By itself, it is difficult for an inexperienced collector to spot a minute difference or discrepancy, but when a dozen tiny differences come together, the final product looks very different to the real thing. The result is a coin that gives you a “bad vibe” or an “off feeling”, as it were.

The importance of experience

Have a look at the photograph below. If I asked you to identify the singer in this photograph, most people would shout out “Elvis Presley” without a moment’s thought. But look at the image again, and you’ll note that something looks “a little bit off”. It looks like Elvis, but it doesn’t look like Elvis. There’s just something “not right” about it. That’s how you want to feel when you look at a counterfeit sovereign. It’s a feeling that will come with time and experience. 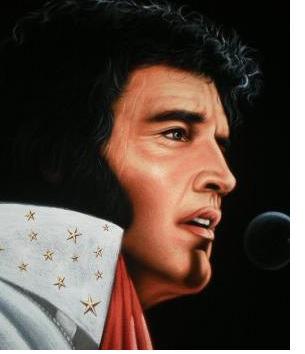 He looks like Elvis, but something is not quite right about it. The painting looks "off".

Here comes the part where I push my own barrow, but the facts are when you buy an uncertified (“raw”) gold sovereign, you will always run the risk of buying a counterfeit or fake. Moreover, on the very small chance that a PCGS-graded and encapsulated sovereign is in fact fake (something I have never seen in the last five years of trading), PCGS will backup their certification with a money-back guarantee, something very few amateur EBay sellers will do.

In the meantime, if you get familiar with the sovereign—its design features, the specific characteristics of each date or mint, the quality of the strike, and so on—you’ll quickly learn how to instantly identify a fake sovereign (yes, instantly). In the meantime, you’ll have to refer back to the points described above. Above all, stay vigilant, and if someone is offering you a gold sovereign deal that looks too good to be true, it probably is.

A counterfeit “sovereign” in silver