In May 2015, a 1920-S sovereign sold at auction for £480,000 (or about AU$940,000 at the then exchange rate). It is finest of the three or four known examples, struck in specimen condition, and carries a pedigree that includes several famous names in Australian numismatics: Robert Jaggard, Paul Terry, and Tom Hadley (custodian of the Quartermaster Collection).

With so much “celebrity” surrounding the coin, more than one collector had commented that it was not necessary to certify the coin: After all, nobody would refuse to buy it because it was “raw”; no collector would question whether it was in high grade, as it was struck a specimen; and nobody would wonder whether it had been cleaned or tampered with—who would do that to the 1920-S sovereign? 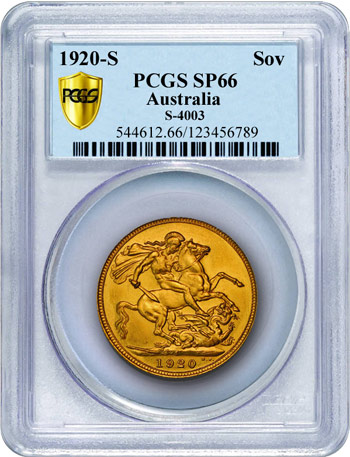 A reconstruction of how the 1920-S sovereign would look in the PCGS holder. The image of the coin courtesy of Monetarium Sydney.

This is the PCGS image of the famed coin.

It was therefore a surprise when I found out that the coin had been submitted to PCGS’ Paris office for grading. And the grade? SP66. Single-finest and a “top pop”, of course (not that a lower grade would have put a dent in the $1 million price tag).

Although I don’t know the identity of the owner of the coin, one hopes that he or she is an Australian and that the coin is perhaps on its way home… comfortably encased in a PCGS holder.