There’s a lot of confusion around the obverse varieties of the Jubilee head sovereign. Everyone from the coin dealers, collectors, authors, and even PCGS have made attribution errors in their publications or reports. Fortunately, there aren’t as many different varieties as at first it may seem, and they’re simple to identify once you know what to look for.

Firstly, there are two major obverse designs, labelled Obverse 1 and Obverse 2. Obverse 1 is considered the first obverse because the first Jubilee head sovereign, the 1887 Sydney, uses this design exclusively. (Sydney-minted sovereigns are customarily placed before Melbourne and Perth in the price guides because the Sydney Mint was established first.) The designs can be distinguished by focussing on the very top of the Queen’s crown: The tip of the Queen’s crown is buried in the denticles on Obverse 1, while the tip of the Queen’s crown is just touching the denticles on Obverse 2. You can also look at the closeness of the left side of the crown to the “D:G:” in the legend. The two design elements are much closer on Obverse 2 than Obverse 1. The images below will assist. (Images in this article are courtesy of PCGS.) 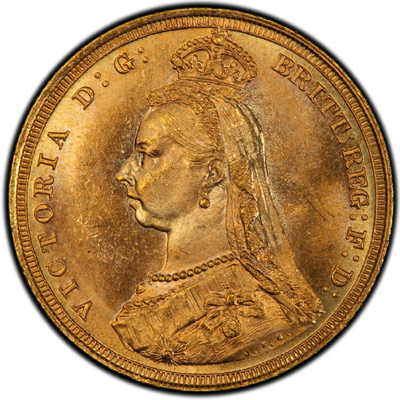 Above, obverse 1: Notice how the tip of the Queen’s crown overlaps the denticles. The distance between the last colon in “D:G:” is also further away from the left side of the crown. The effigy is also wider, although this is harder to see without a comparison coin. 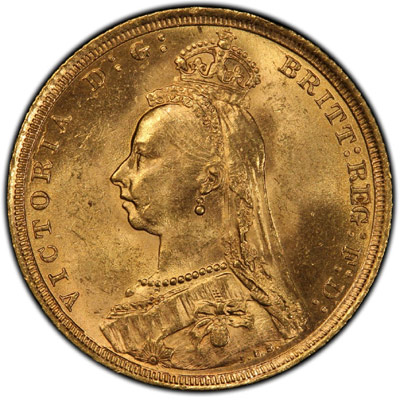 Above, obverse 2: The tip of the crown hardly touches the denticles, while the last colon of “D:G:” is closer to the edge of the crown.

There are three* different ways in which the designer Sir J. E. Boehm’s initials appear on currency-issue Jubilee head sovereigns. They are described in the Spink and McDonald catalogues, but the catalogues use different terms. To confuse matters further, both catalogues use the term “normal JEB” but refer to two different varieties. For clarity, I have used the Spink descriptors to describe each variety, but have noted the McDonald descriptors in parentheses:

Greg McDonald refers to another type called L JEB (large JEB), which appears exclusively on the 1887-M silver pattern. As this is a pattern type, we can ignore it in our discussion.

*There are actually more than three varieties of the JEB initials. The additional varieties most closely resemble the SS JEB variety, but cannot be called sub-varieties, as they are just as valid as the three varieties described above. However, because the differences between the additional varieties and SS JEB are difficult to see without having a coin in hand, we have combined those varieties under SS JEB. This is a stopgap measure, and we’ll expand on these varieties once Spink, McDonald, and PCGS recognise them. If you’d like a detailed explanation of these additional varieties (as well as read about an inferred variety of which no examples have yet been found), you can learn more about them from Mr David Iverson’s Jubilee head sovereign publication, which is available for sale from Baldwins.

Images of the three different types are presented below:

Above, SS JEB or hooked J: Observe the position of the last period after the “B” of the initials. It sits above the lower arc of the Queen’s bust.

Above, another version of SS JEB or hooked J: The last period after the “B” of the initials sits on rather than above the lower arc of the Queen’s bust. By convention, this variety is also described as SS JEB (for the time being).

Above, spread JEB initials ending at right side of truncation, hooked J. The final period after the “B” of the initials sits above the lower arc of the Queen’s bust. The lettering is positioned far more to the right than in the other varieties. 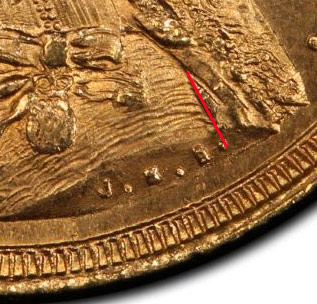 Notice how the red line, which follows the trailing folds of the Queen’s veil, lines up with the final period after the “B” of the initial. Observing the position of the final period is the quickest way to identify this variety.

Above, SS JEB: Notice how the final period after the “B” of the initial sits to the left of the red line. Observing the position of the final period is the quickest way to distinguish between an SS JEB and the "spread JEB initials ending at right side of truncation, hooked J" variety.

Across the Jubilee head series, the tail length of St George’s steed can be either short or long. Fortunately, only the 1891-M was struck with dies that had both long and short tails: All other dates exhibit one tail length or the other, but not both. Notwithstanding the fact that the tail lengths are fairly easy to identify anyway, this simplifies matters greatly.

The quickest way to identify the length of the tail is to examine the distance between the lowest wisp of the horse’s tail and the highest tip of St George’s broken lance, which lies on the ground to the far left of the mintmark, at about 7 o’clock. When the tail is long, the gap between these two points is very small, while the gap is noticeably larger on the short tail variety. 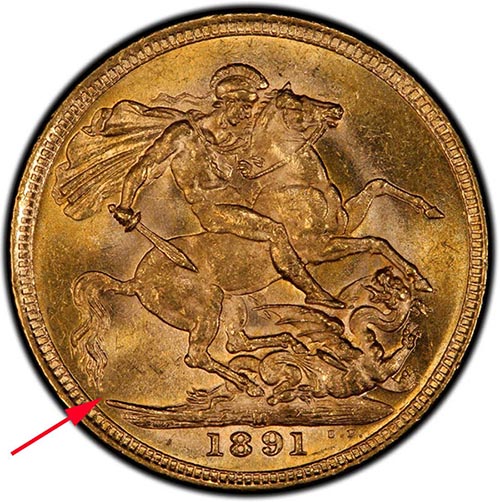 Above, the long tail reverse.