The 2005 Proof Mob of Roos dollar coin graded by PCGS

In 2006, the Royal Australian Mint accidentally issued a number of proof sets with a 2005-dated dollar coin. The reverse of this coin bore the standard Kangaroo design (known as the “mob of ‘roos”). Because the proof dollar coins issued in 2005 carry the End of World War II design, the 2005 proof dollar coin with the Mob of Roos design was never meant to exist. Melbourne coin dealer Downies originally discovered twenty of these coins in their allocation of 2006 proof sets, and Colonial Coins from Brisbane discovered a small number shortly after. In his price guide, Greg McDonald suggests that fewer than forty examples of this coin exist, making the coin one of the rarest decimal issues to date.

Up until 2014, PCGS had not yet certified this rarity, as many collectors preferred to keep the proof sets, in which the coins are housed, intact. However, because it is the dollar coin that is valuable and not the set itself, a number of collectors have sent the coin over to PCGS for grading, including the coins photographed below, graded PR69DC and PR68DC.

Since then, we’ve handled three or four of these modern numismatic rarities. We sent all but one of them to PCGS for certification, and they have graded either PR68DC or PR69DC. So far, none have graded PR70DC. (The coin that we did not send to PCGS appeared to have been struck with foreign matter on the die, as there were wiry marks on the Queen’s nose. We did not believe the coin would grade up well, if at all.)

As of April 2020, PCGS has graded just nine of these coins.

The 2005 kangaroo dollar in proof is a true modern rarity, and with an estimated forty of these coins available to collectors, it is rarer than the popular 2000 one dollar mule, and much more exclusive. 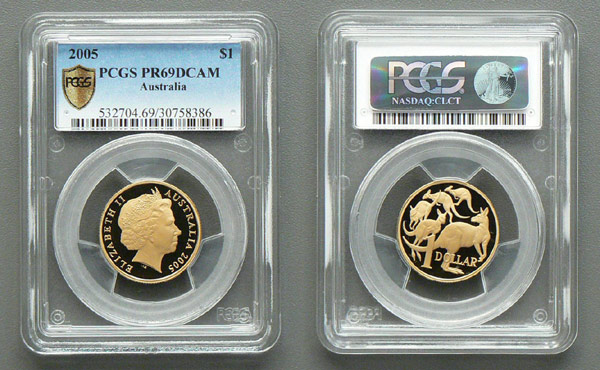