Back
2020
>
Sovereign rarities from Edward VII, ranked from top to bottom

Sovereign rarities from Edward VII, ranked from top to bottom

The Edward VII sovereign series has always been a popular one for collectors. Big enough to be challenging, but small enough to build in a few years, it has appeal to both connoisseur and beginner alike. Canada produced all the major rarities in the series, with the 1908-C specimen coin being covetously pursued. The 1909-C and 1910-C currency issues are also popular. 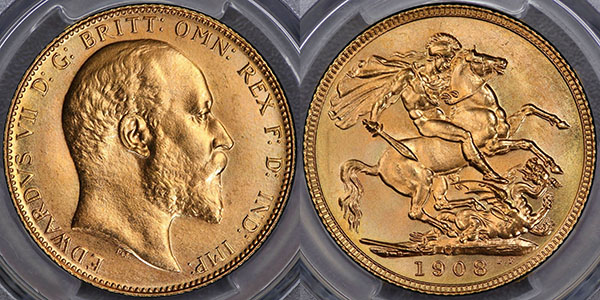 The key date of the Edward VII sovereign series, the 1908-C specimen sovereign.

Outside of the Canadian series, every Edward VII sovereign is affordable and can be obtained for under $1,000 or £500, if one is not grade-sensitive. Generally, Perth mint Edward VII sovereigns are scarcer than the London, Melbourne, or Sydney issues, although there is subtlety to understanding the rarity of the coins from each mint.

Unlike the George V sovereign series, where the rarity of some coins is clearly established, the rarities of each of the dates from the Edward VII is a little harder to get a feel for. In fact, where the more common coins rank on the rarity table is probably less important than, say, the eye appeal or grade of the particular coin under consideration. However, I’ve tried to rank them from rarest to most common. Collectors may disagree here or there toward the bottom of the list, but this page is a good start if you have no background in Edward VII sovereigns and would like to start collecting them.

I have omitted the ultra-rare 1902 proof sovereigns from Sydney and Melbourne, as well as the 1909 specimen coin from Canada. The average collector would be forgiven for excluding these coins from his or her set.