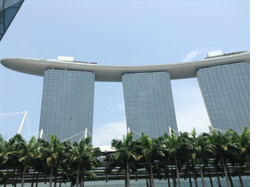 It’s been a while since I’ve travelled abroad for a coin show. However, with the cancellation of the Petersham Coin Show this March (the show will be back on once renovations to the venue are completed), I took the opportunity to attend a coin show a little farther afield. The Singapore International Coin Fair is held every year at the end of March in one of Singapore’s premier hotels, Marina Bay Sands. As one of the biggest coin shows in the Asia-Pacific region, the show attracted a large and diverse range of international and local dealers, as well as many of the world’s official mints, accessories suppliers, and the two largest coin grading services, PCGS and NGC. 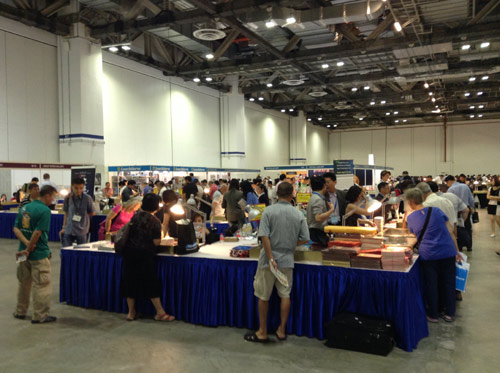 There were dozens of dealers selling millions of dollars worth of coins. 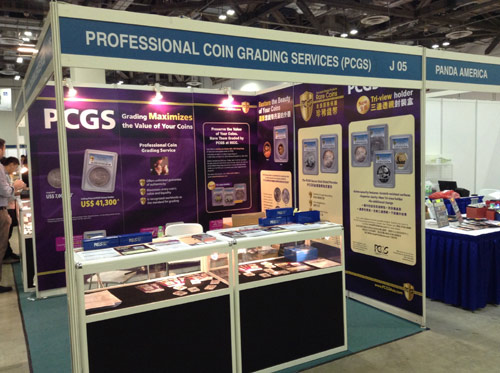 The PCGS stand at the Singapore Coin Show. The stand was

not abandoned. The staff were simply camera shy.

When I arrived Friday morning, the registration area was crowded and the queues long. It took me almost half an hour to get my collectable visitors booklet and badge. But it was worth the wait. The registration area was in a long hallway, but the show itself was inside the high-roofed, warehouse style hall nearby. The first tables before me had crowds before them three or four people deep. The coins of interest were mainly Chinese, Malaysian, and some bullion. Walking about the room, I noticed a clear Asian focus in terms of the kind of coins that were on offer. This is not surprising. I did not quite expect to find hoards of Australian rarities, but I was hoping to find the odd Aussie coin or two that might pay for the trip. Sadly, Australian coins, even gold sovereigns, which are international coins, were thin on the ground. In addition to the traders, there were also exhibits and presentations. On special display was an Austrian Philharmonic gold coin. Containing exactly 1,000 ounces of gold and worth over AU$1.4 million at current prices, the coin was the centrepiece of the Austrian Mint’s trade display. Guards, armed with somewhat underwhelmingly small pistols, stood left and right of the display. An extra guard circled the stand from a distance, no doubt keeping an eye for suspicious activity. Meanwhile, a banknote dealer had wallpapered the back board of their display with uncut sheets of United States one and two dollar bills. I could not resist the temptation to purchase a sheet myself, and am now the proud owner of an uncut sheet of thirty-two one dollar bills. Near the area where presentations were held, there was a display of original currency vignettes from various small countries. There was also a display of original printing plates from which the vignettes were produced. Perhaps most interesting was a small display of intricately designed company bonds. The most famous company of all was the Coca-Cola Bottling Company of Los Angeles. There was also a specimen bond, accompanied by a printing plate, from the Pepsi-Cola Company. 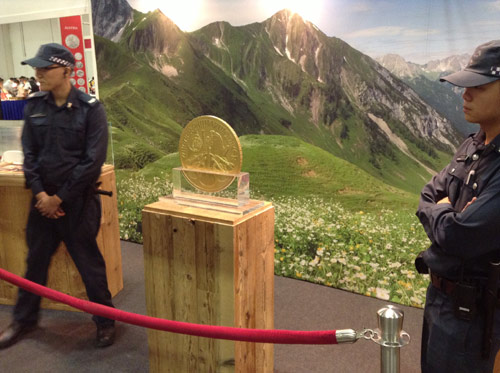 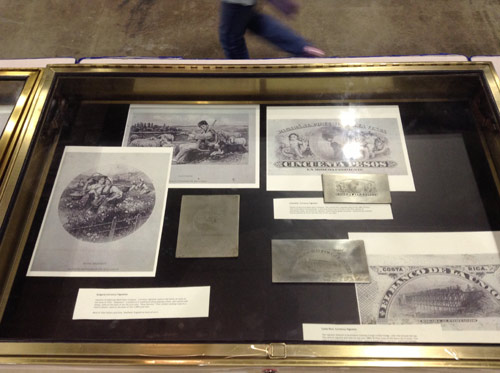 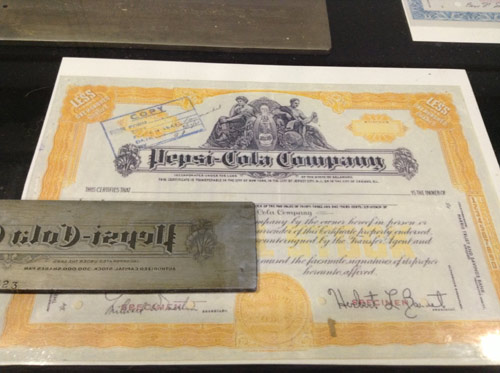 
Afterwards, I made a quick visit to the PCGS stand, where the Vice President of International Development Muriel Eymery was engaged in deep conversation with collector. She had on hand one of PCGS’ new sample holder and was demonstrating the use of the holder’s new 3D security hologram. Overall, it was a good show. Business appeared to be brisk, sales were strong, and the range of coins and currency available for sale was broad, albeit Asian-centric. Unfortunately, because the Petersham and Singapore Coin Shows are held on the same weekend each year, I will be unable to attend next year’s Singapore show; however, given the option, I’d certainly attend again and recommend collectors in the area make the short flight to drop by.