Over the last fifteen years, the number of Australian sovereign errors I’ve seen can be counted on two hands, so when I was offered the opportunity to acquire an 1872 Melbourne shield sovereign that was struck with misaligned dies, I took it with both hands.

Above, the normal orientation of the obverse and reverse on a shield sovereign.
This is called coin die alignment, coin orientation, or coin rotation.

As most sovereign collectors know, the obverse and reverse of the shield sovereign (as well as the St George Young Head type and earlier English sovereigns) are upset by 180 degrees. This means that when the coin is rotated about its vertical axis, the other side of the coin will be upside down. This is normal for the shield sovereign, as well as US circulation coins, and is known as a coin die alignment, coin orientation, or coin rotation. Where the obverse and reverse are the same way up, the coin has been struck with what is known as a medallic die alignment, medallic orientation, or medallic rotation. Australia’s current coinage exhibits the medallic die alignment. 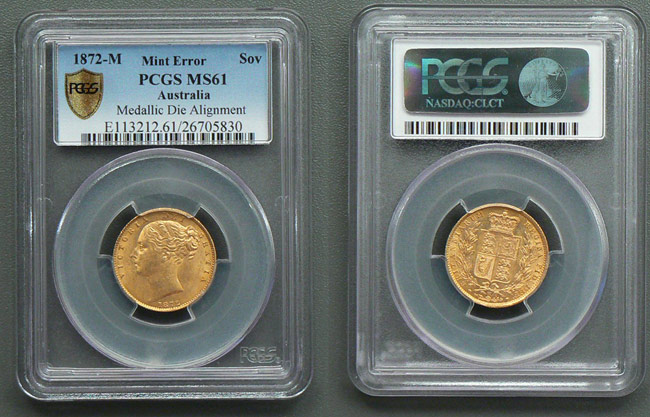 Amongst error or variety collectors, the 1872-M shield sovereign is known for the overdate that occurs in that year. It is less known that a 180 degrees upset also occurs in that year. An example of the error is photographed above. I’ve done a little bit of research of this type online, but there is very little information available about it. Of the few resources that have mentioned the type, it is clear that all agree that the coin is rare and hardly ever appears on the market. I know of three distinct and specific examples. One is currently for sale in Sydney for $15,000 graded PCGS AU55, certificate 80151427, (as of October 2015), the second sold in the United Kingdom through auction in December 2014 for £1,612 (about AU$3,000) described as “Very Fine”, while the third example is in my personal collection and photographed above; it is graded PCGS MS61 and ex the Bentley Collection and Douro Cargo. Another example was auctioned off through Spink in March 1991. It was described as “VF” and qualified as “rare”. As I haven’t seen that coin in the flesh and the image in the catalogue is grainy, it is possible that that coin is in fact one of the other two coins previously mentioned, although it is certainly not the third, the Douro Cargo example. Finally, in March 2010, my brother Walter Eigner stated that he was offered an UNC example from a UK dealer for $20,000. (As the coin photographed above was previously owned by a UK dealer and is also UNC, it’s difficult to say whether the coin is in fact the same coin my brother referred to or a different coin entirely. It seems unlikely, however, as the Bentley auction catalogue implies that the owner of the Bentley Collection had sourced his example from the Douro Cargo auction directly.)

Some of the comments in online forums suggest that all 1872-M shield sovereigns with the medallic die alignment were early specimen strikes that weren’t intended for circulation. Not having been present when the coins were struck, it’s difficult for me to say whether these comments are correct. However, the two of the three examples that I have access to, referred to above, do not exhibit any proof-like or specimen-like qualities. In fact, the two certified examples mentioned earlier actually look as though they were struck from old, crumbling dies.

A close examination of the coin I have on hand, as well as internet images of the second and third coins, indicates that the coins were struck from clashed dies: On the obverse, the horizontal lines against which the Irish Harp is cast are clearly visible on the obverse, just beneath Queen Victoria’s bun, while a silhouette of the leaves and branches of the wreath are particularly prominent just in front of the Queen’s face and nose. The bottom right corner of the shield that encloses the Royal Standard on the reverse can be seen just beneath Queen Victoria’s chin on the obverse. Surrounding the Royal Standard on the reverse, almost like a halo, is the outline of the Queen’s effigy. It’s clear that the two dies struck each other while oriented en médaille. 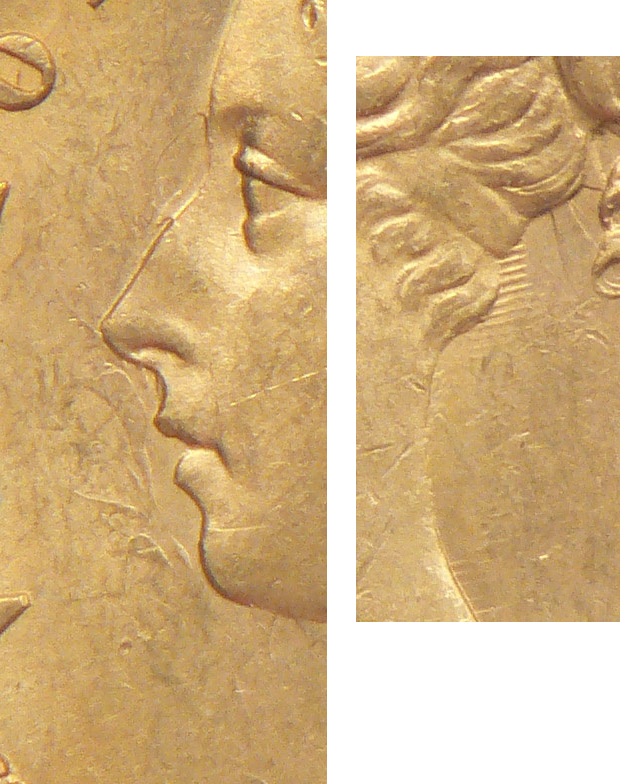 Evidence of die clashing on the obverse. 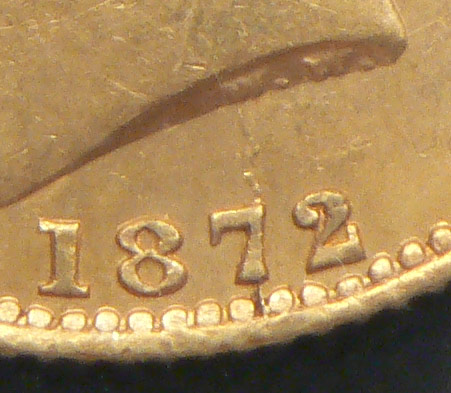 Evidence of die cracks on the obverse. 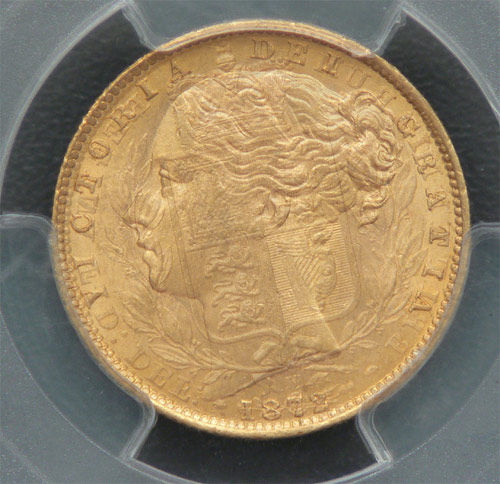 A transparency overlay showing how the obverse die clashed with the reverse die.

In addition to the clashed dies flaws, there is a prominent die crack on the obverse that winds from the truncation, through the "7" of the date, and towards the rim. There are also numerous die cracks spreading like varicose veins through the legend on the obverse.

With all these faults, I find it difficult to believe that this coin was one of the first specimens struck by the Melbourne Mint. If it is, it’s surely one of the worst specimens I’ve ever seen. It seems more likely—and I am only theorising here—that one pair of dies that struck the 1872-M shield sovereign were rotated 180 degrees. This pair of dies struck a number of coins before clashing and then cracking on the obverse. Perhaps then the dies were discarded and production of the en médaille sovereign ceased.

It’s hard to say just how many of these 1872-M shield reverse sovereign errors exist. I can identify only three specific examples, and possibly a fourth example if the example form the Spink 1991 auction is not one of the first three. I’ve been looking out for them for years, and have yet to find any more. The coin is certainly a rarity, no doubt about it - and much rarer than the 1880-S inverted A shield reverse sovereign, of which PCGS has graded sixteen (as of October 2015), and which retails for over $5,000 in AU50. It also appears to be rarer than the 1872/1-M overdate shield reverse sovereign, which makes five to ten appearance a year and retails for around $3,000 in AU50 and over $10,000 in Mint State. Only time will tell just how many coins exist, and therefore how much they must be worth.