The article below is reproduced with the kind permission of the author, Mr Fred Lever. This article, and others, are available as a reference book. If you’d like to buy a copy, please contact me and I'll pass on the message to Fred.

There are three broad categories of fakes, all intended to make money out of little. The first category is a coin, which is cast or die-stamped from metal. The second is a coin that is altered to look like a more expensive coin.

Fairly current examples of these first two categories spring to mind are the $2 fake coins that appeared a couple of years ago and date altered pre-decimal coins such as 1923 halfpennies and 1930 pennies. In the last century around the early 1930s to 1950s living conditions were very tight with not much money available and the temptation to create a bit of wealth was very high. The third associated category that has only just surfaced is the so called “replica” coin, but more of this later. 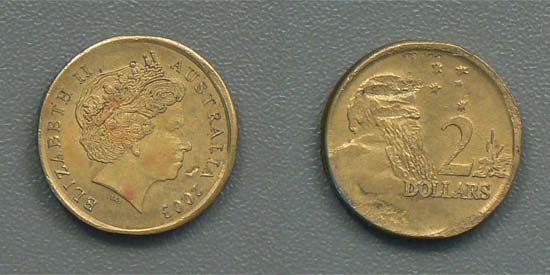 A rather bad counterfeit $2 coin found in change in 2009.

"Do it yourself" coin forging

Desperate individuals would pour low melt metal into crude casts so as to create what they could pass off as a two shilling (florin or “Two Bob”) or shilling (“Bob”) coin.

This may not sound like a profitable venture but fifty or sixty years ago, two shillings (twenty cents) could go a long way. As the coins in question were silver or at least silver coloured, any similar coloured metal was utilised. This was usually an aluminium-lead alloy from scrap parts, although in some “higher class” efforts silver was used. Some extremely good counterfeits used a fine grade silver and were die struck! Presumably here the profit was achieved by the low labour cost and pilfered or laundered metal.

The moulds for pouring a cast coin were contrived by using standard foundry techniques with moulding sand or by using an amateur “short life” mould from impressions of a coin hand-pressed by a vyce into a suitable material such as wood or leather. A coin provided the male “pattern” and the female impression produced in the medium then gave a passable likeness.

A give-away with a lot of these cast coins is the presence of “tails” in the finished product. These are the points in the moulding corresponding to the passages into which the metal was poured and where the displaced air escaped. Once removed from the mould the tails have to be filed off to complete the shape of the coin. A close look at the rim of any cast coin will reveal a likely point where this took place. A “blow” mark may exist on the rim where a bubble of air has been trapped.

On more professional levels, forgers may have had access to copying and press minting machinery. In days gone by, there were plenty of firms whose business was making cast or pressed medallions, medals and commemorative coin size pieces. These were normally produced on a limited scale and had nothing to do with circulating coinage. It does not take much of a stretch of imagination to realise that the machinery that was punching out your prize-winning club medallions by day might be punching out rather different silver and gold discs by night!

A much cheaper shot at deception was the “silvering” of a common halfpenny to pass off as a shilling and silvering of a penny to pass off as a two shilling piece. Very profitable if you could get way with it. Silvering was achieved crudely as using silver paint, hot lead wiping, Mercury wiping, or, the good old standby, chrome plating. In the main, these efforts were quite amateur in process and nothing much more than trying to stretch a meagre income or lunch money with ingenuity.

A concern to the coin hobby

The more serious concern today is the previously mentioned replica die-struck coins. To my horror, I see traders offering almost any pre decimal coin in the rare copper dates and even silver coins in uncirculated condition of any date. This surpasses the normal offering of dud 1923 halfpennies and dud 1930 pennies by a long chalk and is dangerous in several respects.

One: They are counterfeiting the 1911 to 1964 currency of the Commonwealth. Being non-circulating coins does not alter the illegality of the procedure, as I understand the law.

Two: They threaten the security of our hobby by producing coins that can be passed off as rare and valuable specimens. When the replica in question is struck with enough differences for any half-knowledgeable coin enthusiast to pick, I don’t see too much of a practical problem. The problem really arises when the replica is mint perfect.

With modern copying and die producing equipment, to reproduce the less complex images on pre-decimal coins is a piece of cake. I fear that even if the original intention of the makers is to provide replicas, these things are going to get artificially aged and toned to be offered down the line as the genuine article. What one sees as a result is a near perfect coin, better than the best of forgeries! So when presented with a nice coin at a show or shop, which is “near almost uncirculated but toned”, how are you going to know it’s the real thing, apart from your knowledge of the coin face.

I doubt that anybody would attempt to pass off a counterfeit 1930 penny as the buyers, in this case, would be especially on their guard. However, a lower priced coin such as the 1923 halfpenny may not attract such close scrutiny, particularly if the buyer is new to coin collecting. A coin such as this has already appeared on a popular internet auction and not stated to be a replica. I have seen some coins where the word “fake” or “copy” is built into the design, but coins such as those, below left, have no such warning. Most collectors will be pretty familiar with the obverse of the George V bust. The image remained very constant over the years and a variation or lack of detail not caused by wear on the King’s effigy or lettering will be apparent. However, the date numerals on the reverse of a typical genuine coin tend to vary a great deal from year to year as some of the numerals were hand punched onto the working dies. This can confuse the issue and a direct comparison with the same variety of date is necessary. Fortunately, there are not too many varieties of the 1930 and 1923 coins.

Study the coins shown below, the duds are left and typical genuine on the right. Note the differences in letter style, spacing and subtle differences in the effigies. Buyer beware! 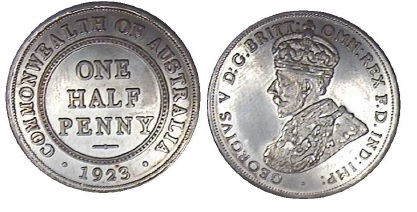 Back to common coin duds

Leaving the serious stuff there, let us look at some examples of pre-decimal hokey pokey.

The 1939 halfpenny, has been wiped with lead solder. The wiping is a bit clumsy but never mind, if you throw it into a pile of silver coins and don’t look too close, it passes nicely as a “One Bob” piece. The 1947 copper penny has had a swim in the plating vat and come out all chrome and shiny. Because of the greater size than a two shilling it would stand out a bit, but worth a try at a busy pub or somewhere else where the cash of all sizes was flying back and forth over the counter.

A contemporary fake florin made out of an aluminium/lead alloy.

The 1926 two shilling is a cast aluminium/lead alloy coin. It is not a bad effort. The coin weighs in at 10.6g a bit short of the 11.3g correct weight and is about correct dimensions. Note the coin is “upset” as well making it a double error!

The 1932 florin, above, is an upmarket model with good detail but certainly cast as the pouring or relief point can clearly be seen on the reverse side rim at 3 o’clock. The maker of this one was certainly “going for gold”. Check the date: It’s the scarcest of the florins. This coin is not quite up to the standards of “Twible and Manders”, the renowned and documented strikers of “Replica” Florins in the 1930s.

Another fake florin, left, with a comparison coin to the right.

The coin above, shown on the left, very interesting fake florin. A normal coin is shown for contrast, right side images. The fake has the appearance of having been struck on a copper planchet. While lightly struck, some of the detail is quite fine causing doubt that this is a cast coin. There are the remnants of obverse lettering from the donor coin, a penny! Look at the obverse especially around 12 o’clock for the original struck lettering “BRITT OMN” and the orb of the crown. It appears this coin was made with penny as the donor and then die struck and coloured to achieve a florin look alike. This coin was created by a forger with enough resources to create or borrow a die set and stamp the coin in a suitable press. The first image left shows the obverse of the fake next to a standard penny; the second image above shows the reverse next to a standard florin. 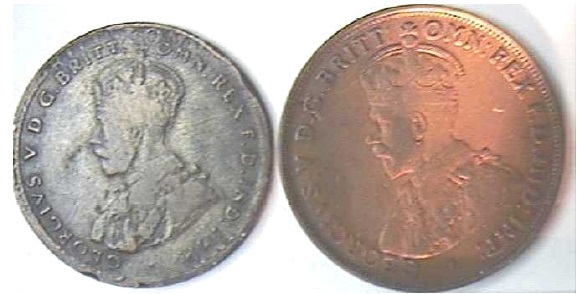 On the left, a fake florin manufactured from a penny. Look at around eleven o'clock and you can still see the original legend from the penny "host coin". On the right is a penny shown for comparison.

The 1932 penny, shown above, has a typical grainy surface and a defect on the rim corresponding to the pour point of a cast coin. The obverse has shrink stress lines over the face and the reverse has a chunk missing at the pour point at the top. All in all you would wonder why anyone would try to cast a penny and this one was certainly a failure.

The 1953 halfpenny, shown below, has been coloured silver and provided with a milled edge for extra proof of authenticity as being a shilling! Over the years the silvering has discoloured but the milling remains intact. 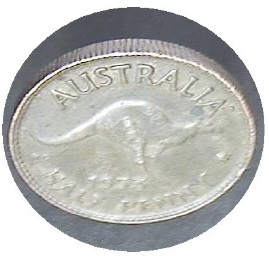