Back
2020
>
Collecting the gold sovereign

There have been several designs going back over time and it's quite straightforward to build up a collection of one of each of the different designs. The obverse side of the coin features the bust of the ruling monarch of the British empire and the reverse side portrays either St George slaying the dragon or the crowned shield of the Royal Arms. Early Australian sovereigns bear a wreath enclosing the words “Australia”, which is encircled by “Sydney Mint” and “One sovereign”. If you decide to collect sovereigns by design, one representation of each design will complete the set. 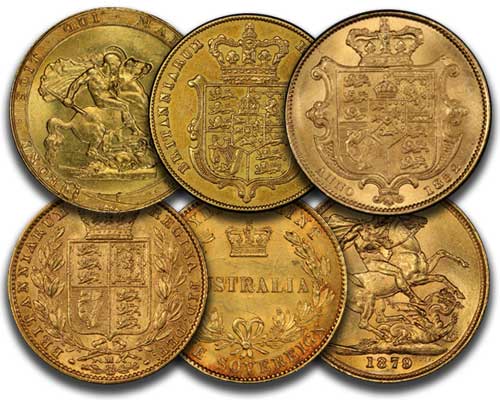 The six major reverses on the gold sovereign.

Mintmarks are small letters on one side of the sovereign that symbolises where the coin was minted. Coin collectors may collect an example of a sovereign from of each of the seven mints. These are the mintmarks found on the gold sovereign:

Only during the reign of King George V are all seven mintmarks available.

You can also build your collection by having a sovereign from every monarch from George III to Queen Elizabeth II. A total of eight coins completes this collection. If you want to broaden your scope, you can add the main gold sovereign effigies from each of the monarchs. For example, Victorian sovereigns have five different designs: 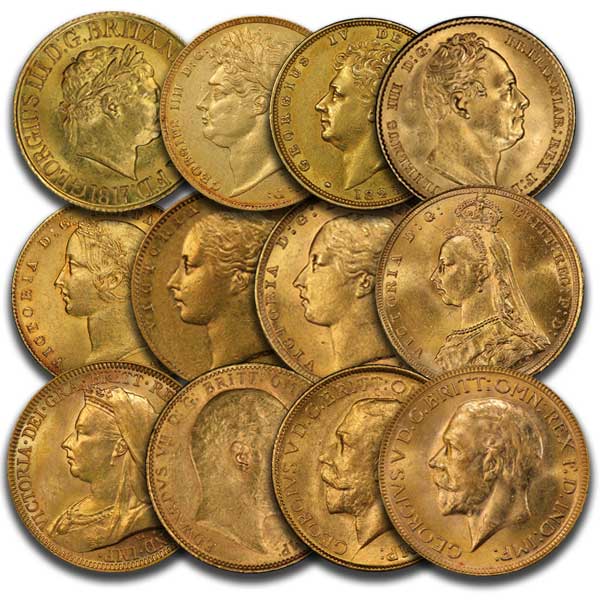 The twelve major obverses on the gold sovereign.

Collect sovereigns by date and/or mint

Edward VII sovereigns were first struck in 1902, one year after the king’s coronation. He ruled for nine years and only one sovereign design was issued during his reign. The obverse features the side portrait of the king and St George slaying the dragon on the reverse side. Because the Edward VII set is so small, many collectors seek to build a complete date and mint set.

George V gold sovereigns can make up a unique collection, as sovereigns were minted at all seven branch mints during his reign. Some of the sovereigns, like the 1920 Sydney sovereign, are extremely rare. While a number of dates are outside the budget of all but the most well-heeled collector, many collectors focus on building a date set, as this is feasible for most collectors, and the set can be built steadily over a number of years.

George V sovereigns feature two types of designs. The first type (1911-1928) has a larger portrait of the king than the second type (1929-1932). A type set requires both coins, while a date and mint set is small and affordable if the collector is prepared to compromise a little on the grade of the rarer dates.

The specially-created Queen Elizabeth II reverse designs are some of the most popular gold sovereigns issued in modern times. These were minted to commemorate significant occasions in the history of the sovereign. The first special design was issued in 1989, on the 500th anniversary of the historical sovereign. Queen Elizabeth II’s golden and diamond jubilees were also earmarked with one-year-only designs in 2002 and 2012. The 2017 bicentenary is the latest of this special line of coins. All these were sold out in record times. These modern classics are among the most popular and sought-after gold sovereigns amongst modern sovereign collectors. 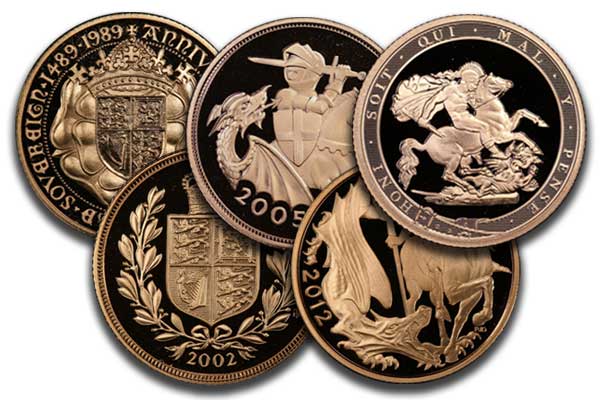 The five major reverse designs on the gold sovereign.

Another way to build your collection is by owning the Royal Mint’s annual sovereign issues. The bullion issues are very affordable, while the proof issues sometimes get sold out in a matter of weeks.

Rather than picking coins randomly, adopting any of the systematic approaches mentioned above will help you build a distinctive and interesting collection. You can purchase gold sovereigns from local coin dealers, coin auctions, or online shops, and as long as they are reputable, you’ll soon have an attractive and valuable heirloom.

Mintmarks on the gold sovereign