It’s not the first time that someone has wondered what stories could be told if only coins could talk. An ancient gold aureus might have once belonged to Julius Caesar; or perhaps it was that hammered French écu I saw in London that time that was used as part of King John II’s ransom in the 1300s; or closer to home, perhaps that worn down Holey Dollar I sold a few years back was carried by Governor Macquarie in his pocket, or, even better, hidden in a secret compartment in convict William Henshall’s coat.

Because the individual history of a particularly coin can be interesting, both PCGS and NGC recognise the provenances of certain coins. While we’ll never know whether Governor Macquarie held that Holey Dollar in the 1800s, we can certainly connect more recent collectors to their coins. In the last decade in particular, it’s been fashionable to give a prestigious collection a name, and then disperse it in a well-marketed, well-publicised, single-owner auction event. The coins from these named collections are subsequently submitted to either PCGS or NGC for certification, still mounted on the auction house’s original description cards. The coins are then graded, and the name of the auction is typed onto the PCGS or NGC certificate, preserving the coin’s provenance.

There have been dozens, perhaps hundreds, of individual collections pedigreed by the two grading services. A small handful of them have contained Australian or English coins. Those that I am aware of are listed below:

A small handful of coins from the famous Douro cargo have been certified by PCGS and NGC. Many amongst these are sovereigns, but Spanish, Mexican, and Portuguese gold coins from the Douro have also found their way into holders. Sovereigns bearing the Douro pedigree generally trade at a premium, although the coins themselves are not known specifically for their high quality. 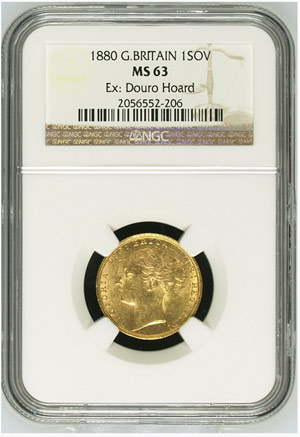 I
mage courtesy of NGC.

Louis E. Eliasberg, Sr, assembled his collection of mostly US coins over a thirty year period and didn’t stop improving his coins until his death in 1976. His collection was dispersed in the following decades through his two sons, and a number of the coins were subsequently certified by the grading services. The Eliasberg collection contained several Australian and English rarities, including an 1852 Adelaide Pound Type II in NGC MS65 and a possibly unique uniface 1825 English £5, certified NGC PR63CAM. A small proportion of Eliasberg coins are pedigreed in PCGS holders. 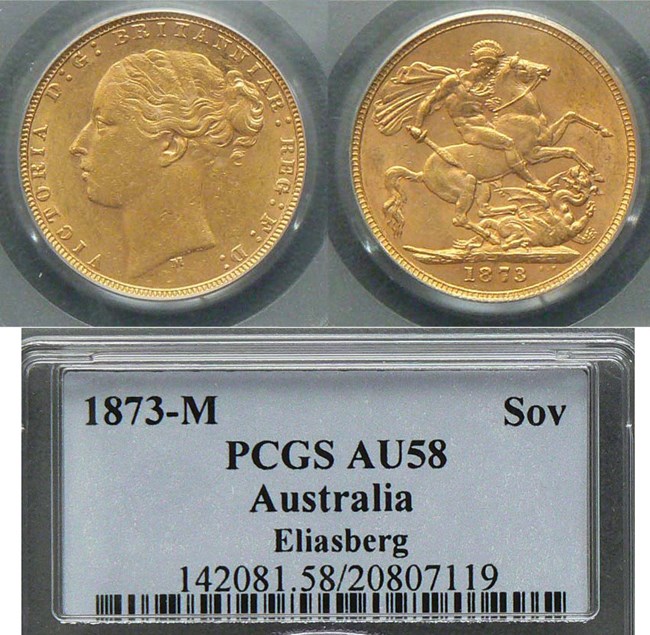 The Pittman Collection was assembled over a period of fifty years from 1940 to the mid-1990s. Coin dealer David W. Akers dispersed the collection between 1997 and 1999 in a series of three auctions; the collection became one of the most valuable group of coins ever to go under the hammer. Although John Jay Pittman had focused mostly on US coins, he did acquire a small number of select world coins. Several coins from this collection found their way into PCGS and NGC holders and today regularly trade the international market. They are generally in older holders and are perceived to be of superior quality, even compared to similarly-graded coins.

The Terner Collection was dispersed by an American auction house in May, 2003. Dr Jacob Y. Terner built his collection over twenty-two years and focused primarily on English milled gold coins. The collection was certified by PCGS prior to being sold, so most of the collection has been pedigreed. Today, twelve years after the auction, coins with the “Terner Collection” on the PCGS certificate turn up for sale from time-to-time, and are recognised for their superior quality and eye appeal. 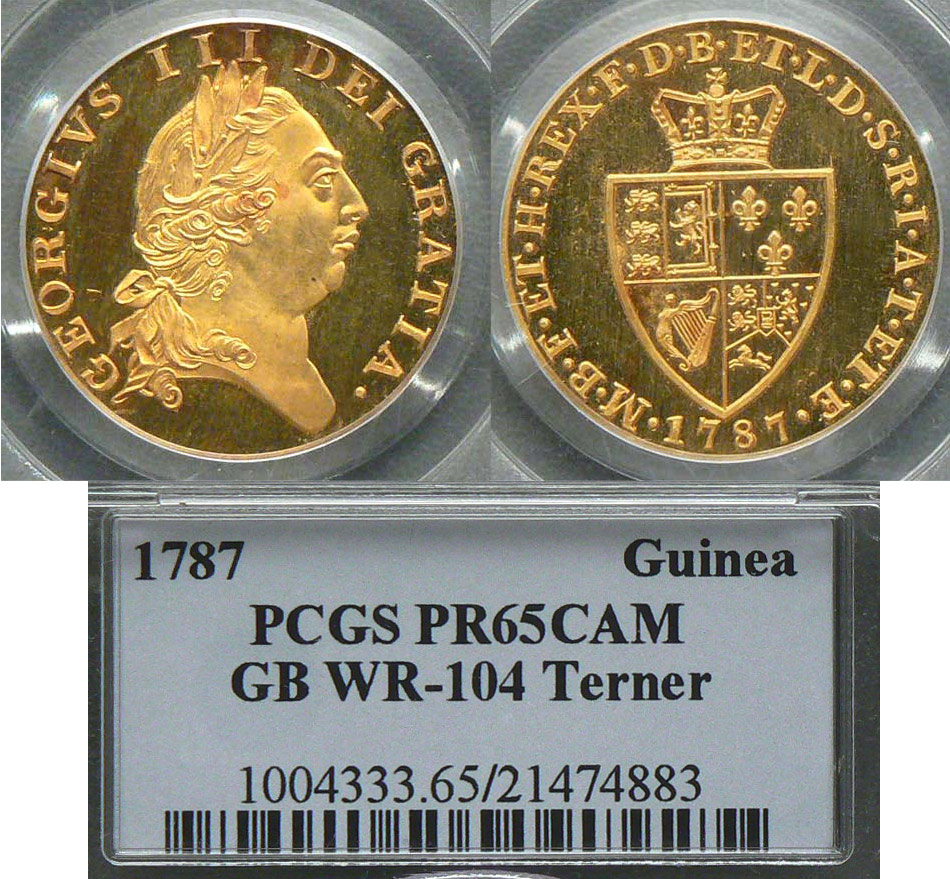 A collection of primarily British hammered and milled coins disperse by Ira and Larry Goldberg Auctioneers in June 2005. The collection was initially certified by NGC, but PCGS-certified examples bearing the Cheshire Collection pedigree on the certificate have turned up from time-to-time. 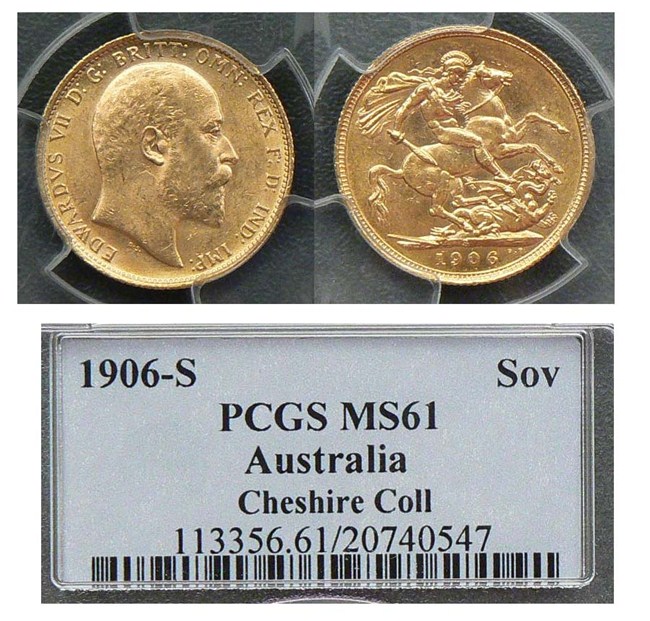 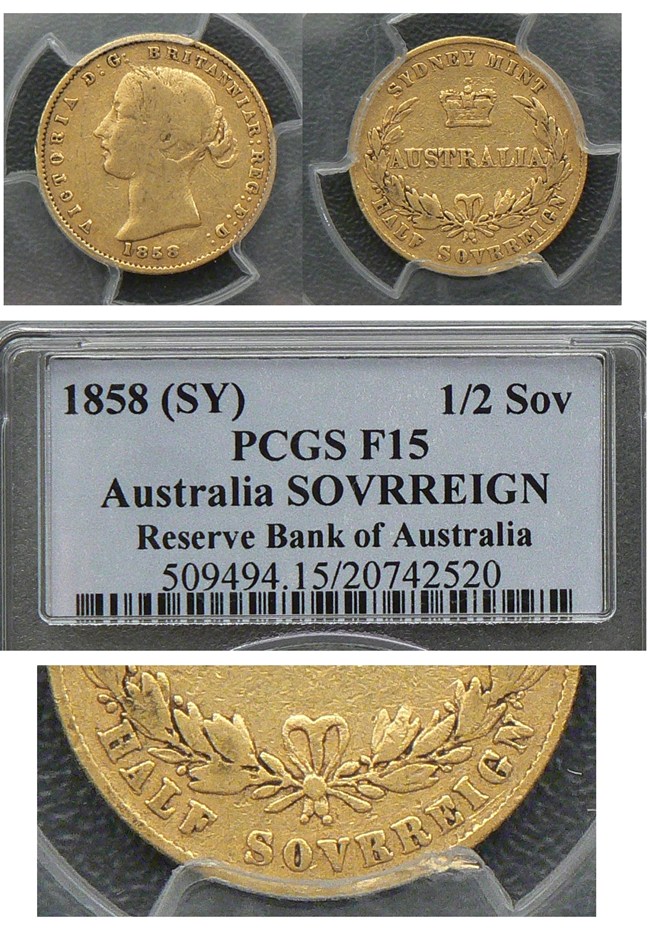 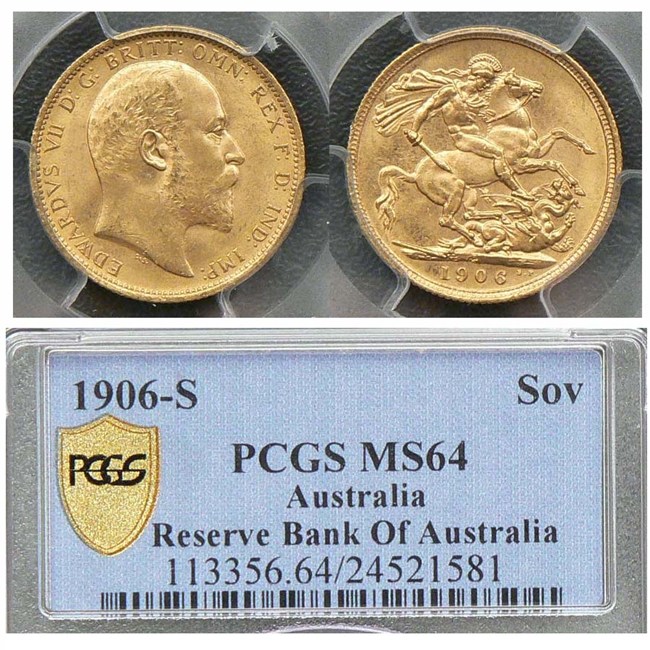 Begun in the 1940s by Jerome H. Remick, the Remick Collection was one of the most comprehensive variety collections ever assembled. It included varieties from across the British Commonwealth, with an emphasis of unusual items and proofs. The collection was dispersed in London between October 2006 and January 2007. PCGS has pedigreed coins from this collection. 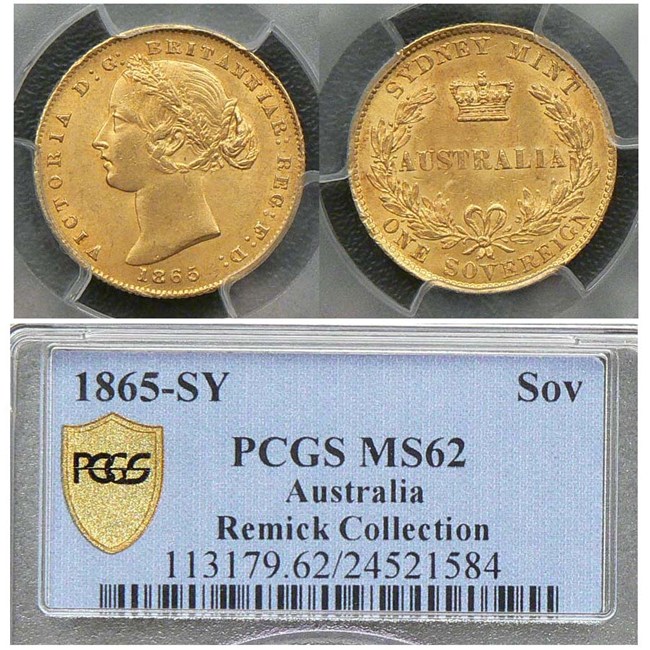 The Rive d’Or (a mistranslation of “Bank Gold”) Collection was a massive hoard of gold coins held by a Paris bank and released through a US dealer in 2008. The accumulation contained mostly US gold coins, but also included Australian sovereigns and other world coins. The coins were allegedly accumulated by the bank during and after World War II. The collection itself is well-known in the US, but it is less known in Australia. 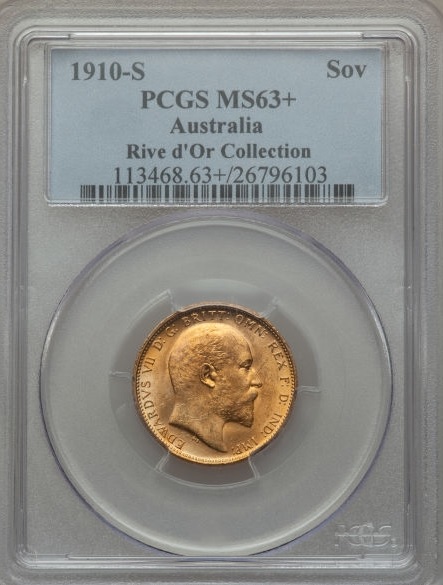 One of the most comprehensive Australian gold collections ever assembled. Put together by collector Tom Hadley in the early 1990s and early 2000s, the set contained every currency issue sovereign and half sovereign issued in Australia, as well as numerous rare patterns, proofs, and unofficial pre-Federation coinage. The collection was dispersed by Monetarium (Australia) in June 2009. A small, but not insignificant, run of sovereigns and half sovereigns purchased from the auction was submitted directly to PCGS. These coins trade in the market today with the Quartermaster Collection pedigree preserved on the certificate, and trade at a small premium to similar coins without the pedigree. 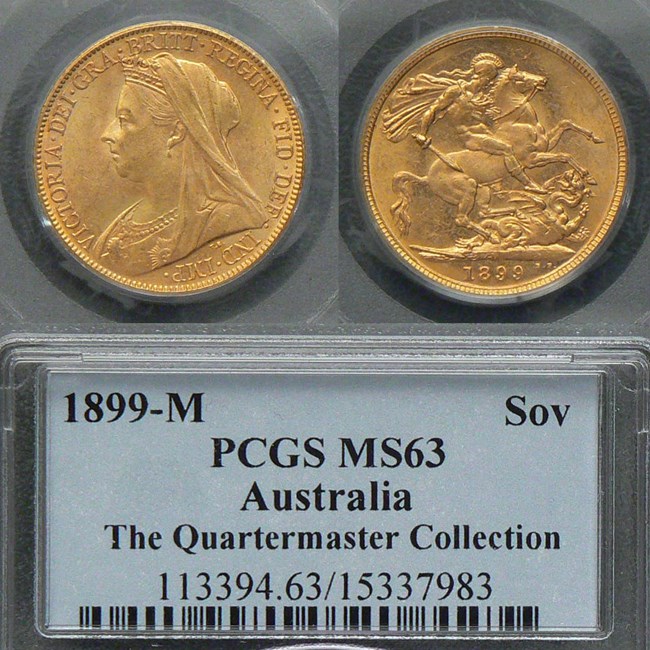 The Ezen Collection contains very high-quality English and Australian gold coins, and belonged to prominent London collector Aydin Ezen. Mr Ezen is still actively adding to his collection, and but I am unsure whether later additions to his set will have the Ezen Collection pedigree preserved on the certificate. Coins from the Ezen Collection are found in PCGS holders, and are pedigreed as part of the PCGS Set Registry program.

A comprehensive collection of British Commonwealth sovereigns that went under the hammer in London between May 2012 and May 2013. The collection included almost every date and mintmark currency issue sovereign issued by the Royal Mint and its branches. The collection also included a number of high-quality proof issues. Both PCGS and NGC have pedigreed coins from the Bentley Collection. 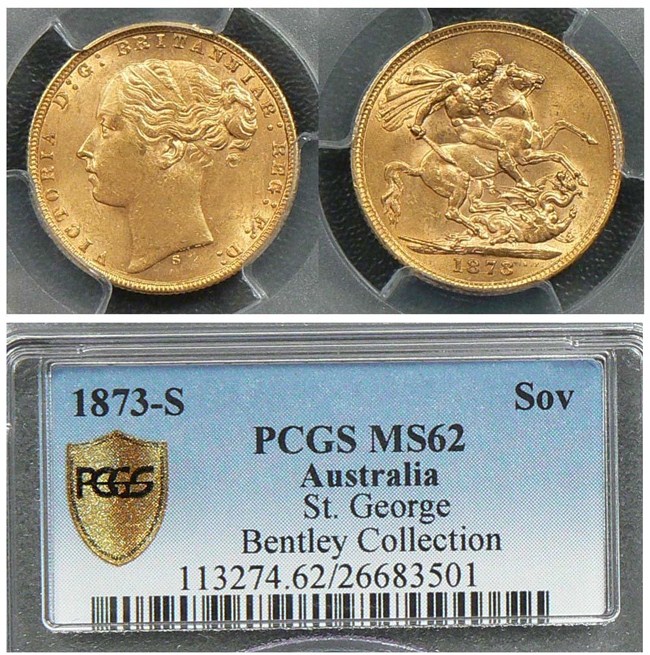 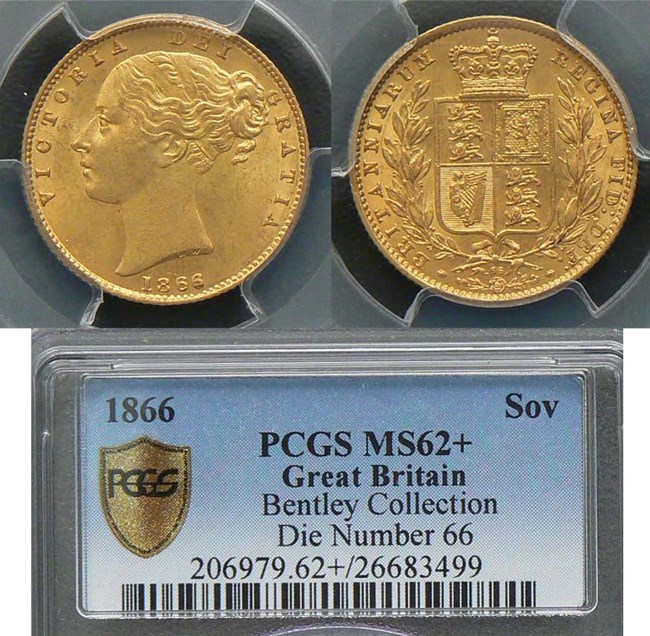 A near complete set of Australian Commonwealth Coins assembled by Australian collector Wayne Borg. In 2012, the set was submitted to PCGS by Sydney coin dealer Chris Buesnell, and the coins that successfully graded bear the Borg Collection pedigree on the certificate. They turn up from time-to-time on the secondary market, and can sell for a small premium to an unpedigreed coin. 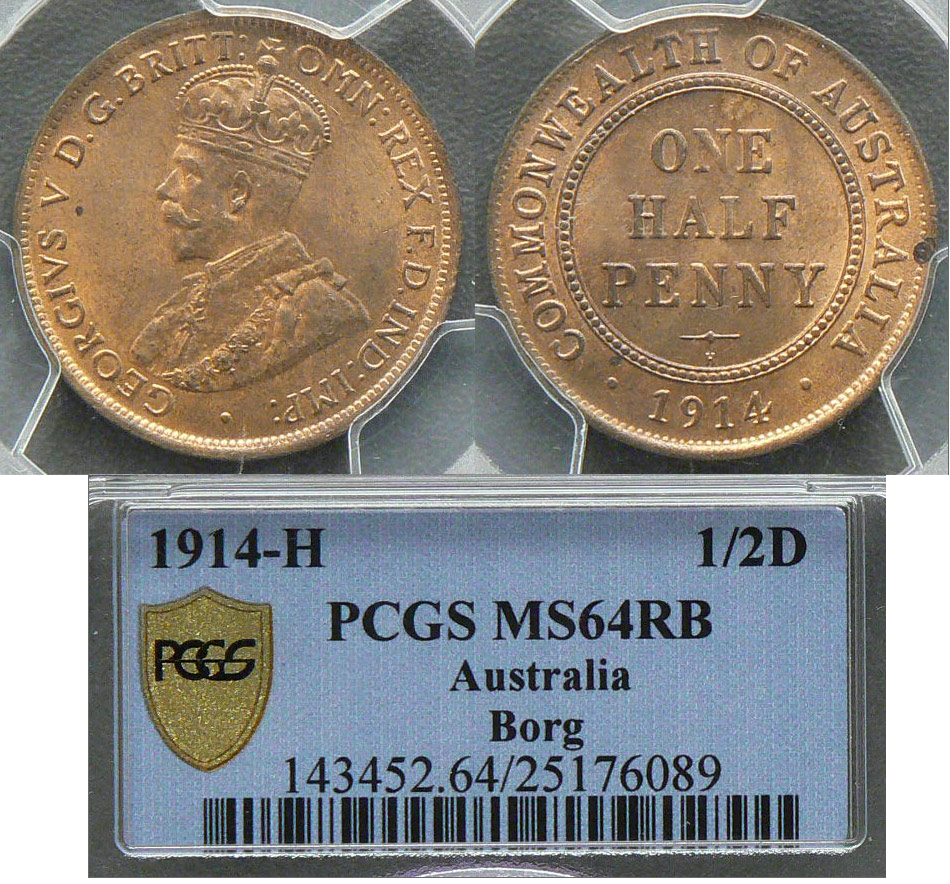 The Samaszko’s Carson City Gold Hoard was a US$7 million accumulation of US and world gold coins that was uncovered after the death of its owner, Walter Samaszko Jr, in May 2012. The collection contained US gold eagles and double eagles, Mexican 50 pesos, and sovereigns. A portion of the coins were certified by NGC and PCGS, and bear the name of the hoard on the certificate. 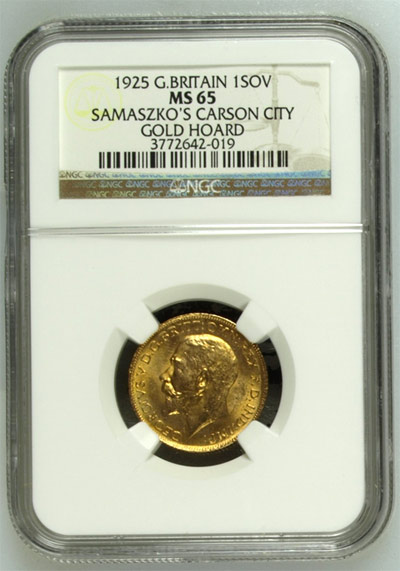 The Hemisphere Collection went under the gavel in May 2014. The collection was assembled over a ten year period, starting in 2003, and contained some of the rarest and most valuable modern and hammered sovereigns ever issued: Highlights include the rare Edward VIII proof and the 1953 proof. I have seen at least one coin from this collection in an NGC-graded holder with a pedigreed certificate, but I’m sure there are others. 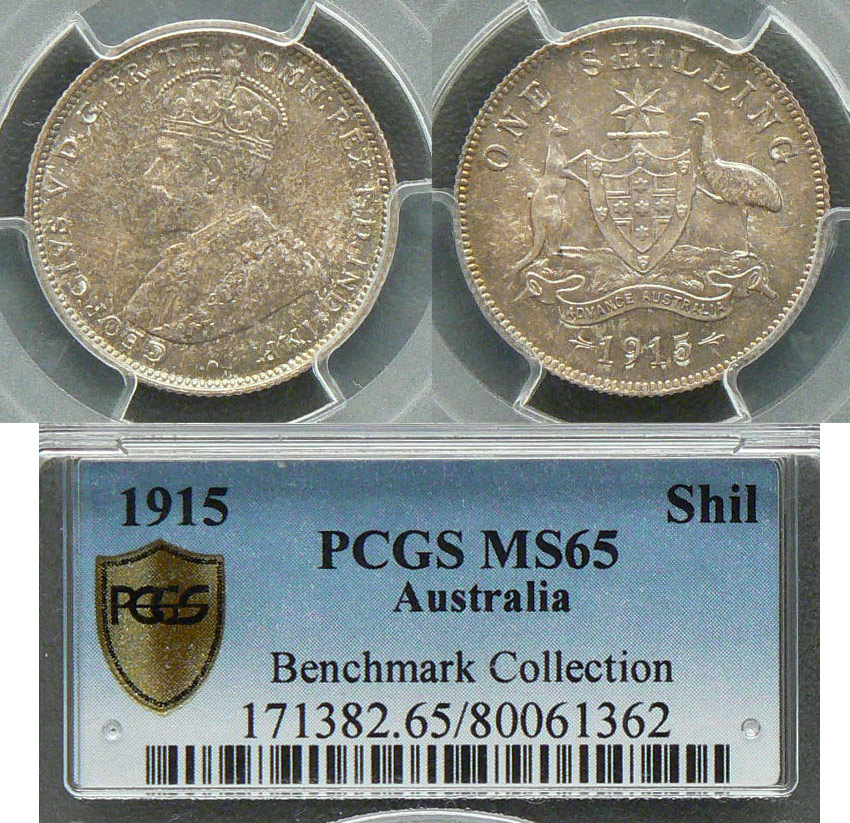 The Park House Collection went under the hammer in May 2015. The collection was assembled over many years by Bob Jaggard and Mark Rasmussen on behalf of a Singaporean-based collector. The collection contained a nearly-complete run of English and colonial sovereigns from 1817 to 2011, while the Australian section of the set included several issues from the Quartermaster Collection. Special varieties and the two Adelaide Pounds were also included. The collection did not contain the Edward VIII 1937 proof sovereign, but both 1920-S specimen sovereign (ex-Quartermaster Collection) and 1953 proof sovereign (ex-Hemisphere Collection) were represented: These two coins alone together brought in over $1.7 million Australian dollars. Several of the Australian rarities were submitted to PCGS and subsequently graded, and bear the Park House Collection pedigree. As of writing (July 2015), the collection has not quite got the name-recognition of the Eliasberg, Terner, or Quartermaster collections, but I believe this will change in time as the collection gains prestige. 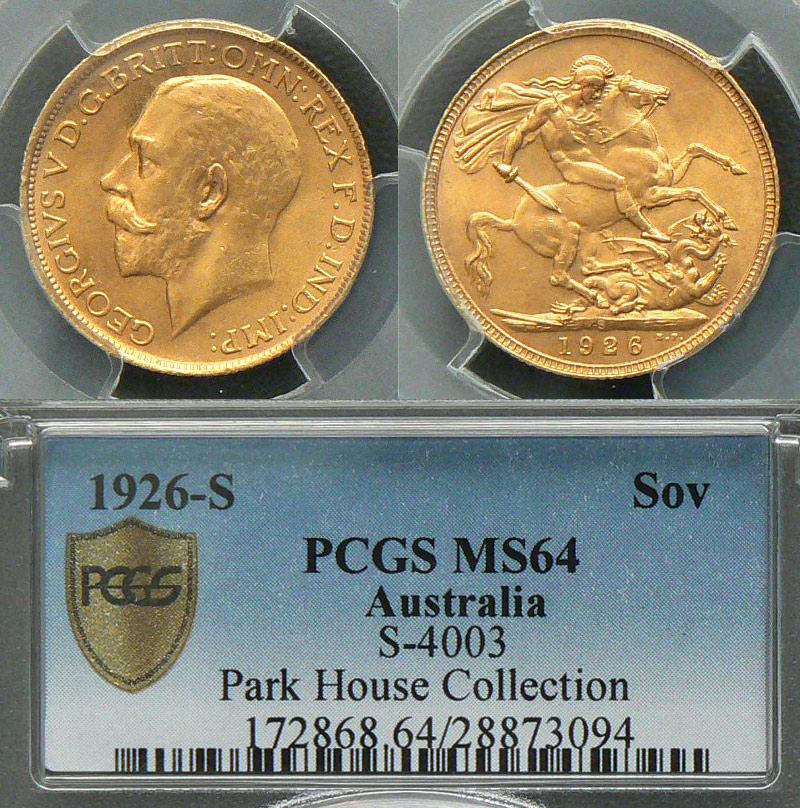