Although we weren’t able to personally attend the ANA Coin Show in California this year, our roving correspondent and collector Phil Hickman was able to head over there for the week. He sent us this report upon returning.

The ANA World’s Fair of Money was held at the Anaheim Convention Center over five days between the 9th and 13th August 2016 and it coincided with the 125th anniversary of the formation of the ANA for which the association is justifiably proud. It was an extremely professional and well-run event with lots of activities, including demonstrations and displays aimed at promoting coin collecting as a hobby as well as a platform to bring collectors into contact with lots of coin dealers and numismatic associated groups/businesses from all over the world. Whilst the ANA claimed that there were 1,000 coin dealers in attendance, this number may have been somewhat inflated but there were still plenty to keep the keen collector occupied and interested for at least the first four days. In this regard, the last day of the event had no admission charge which is reasonable given that many of the dealers had already left the venue or were in the process of packing up. Daily admission was US$8 or US$30 for the duration of the show. 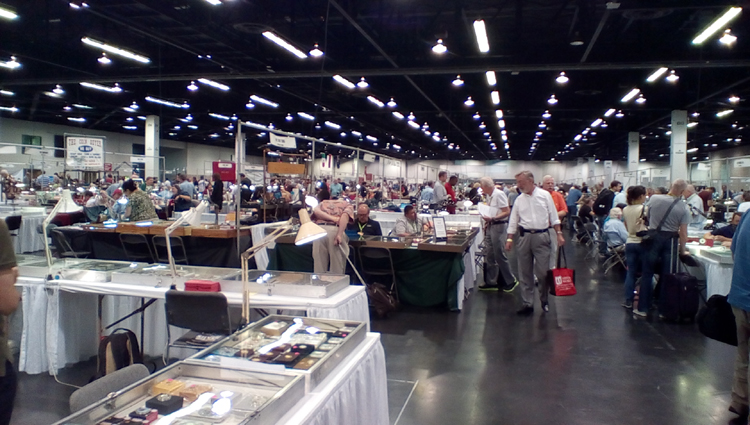 Although a majority of the dealers in attendance were focused on US-related material, there were still plenty of opportunities for the collector of world (including Australian) coinage and currency. Whilst the Americans have clearly embraced third-party independent grading services (in particular, PCGS and NGC), there were still plenty of quality raw and uncertified coins and currency on offer. It was also surprising to see how much material was being sold at or just over melt value. Meanwhile, competition for coins and currency from Australia seemed minimal given that only a couple of Aussie collectors and maybe only one dealer from Sydney were in attendance. 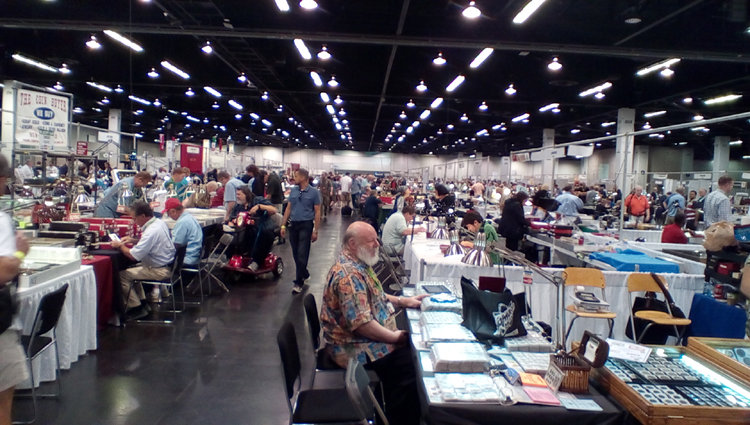 Another view of the main trading bourse.

Stack’s Bowers Galleries and Heritage both conducted a number of major auctions during the show, with impressive and expansive catalogues of some of the finest coins and currency available. Of note to Australian collectors was the sale of an 1858 Sydney Mint Type 2 Sovereign in NGC MS62 holder for US$4,600 plus buyer’s premium of 17.5%. Heritage sold an 1886M Shield Sovereign in a PCGS AU55 holder for US$9,400 and a 1914 Birmingham Florin in PCGS MS65 for US$16,450 and a 1927 Proof Canberra Parliament House Florin in NGC PR66 for US$17,625. 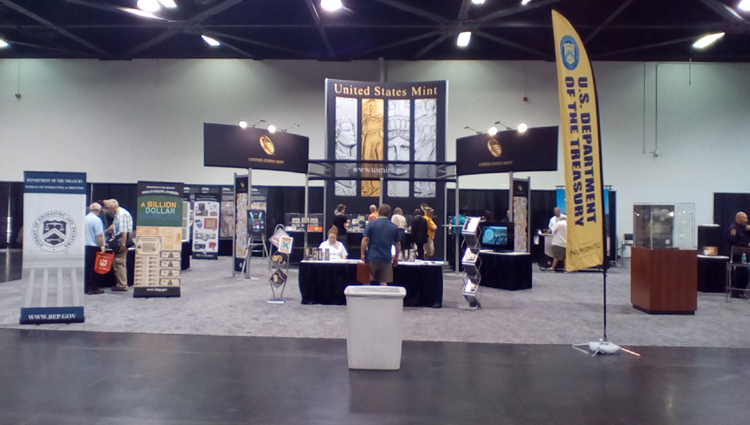 The US Mint stand.

Notwithstanding the big ticket auction house offerings, there were still plenty of lower priced alternatives to be had on the floor of the main convention, and from discussions with various dealers, there was general agreement that many of the other US coin shows are equal to, if not better than, the World’s Fair of Money. Of these, the following may be worth checking out: