A visit to the Reserve Bank Coin and Banknote Museum

Although I’ve lived in Sydney all my life, I’ve never found the time to visit the Reserve Bank of Australia Coin and Banknote Museum next to Martins Place. I had a few hours spare just before Christmas, so I made the trek down to Macquarie St to look at some coins and banknotes.

It’s a very professionally-presented exhibit, with a wide range of currency on display. It is mainly a banknote exhibit, but there were some coins there too, including a pair of Holey Dollars and Dumps, Sydney Mint sovereigns, at least one 1855 Sydney Mint half sovereign, and a British five pound piece. An old printing press was on display, as well as vintage bonds, share certificates, and examples of counterfeit currency. 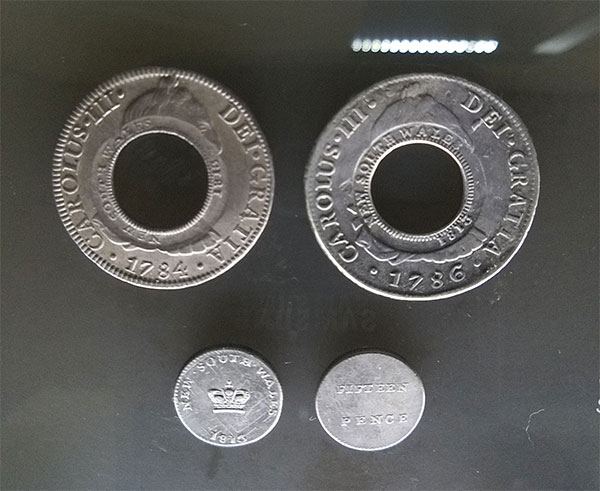 A pair of Holey Dollars and Dumps. 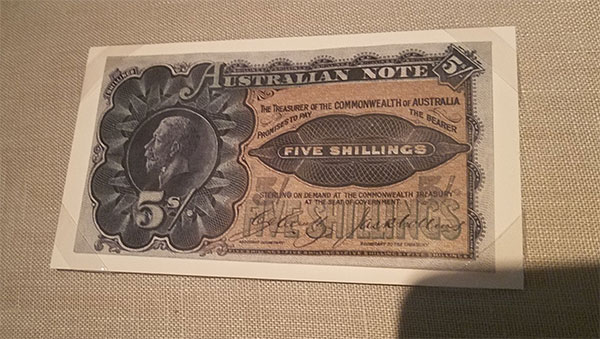 An unissued five shilling or one crown note from George V.

Whenever I see a numismatic exhibit, the coins and banknotes on display tend to be of low quality, or have problems such as cleaning or damage. One museum I visited in Malaysia also had counterfeit coins on display (and not marked as such). One thing I will say about the Reserve Bank display was that the coins and banknotes on display were of very good quality and were numismatically important. The sovereigns were original and in high grade, and even the extremely rare 1855 Sydney Mint half sovereign was respectable. (The coin on display was worth probably $30,000 to $40,000.) The Holey Dollars were superior to a lot of the Holey Dollars one sees on the market or at coin auctions, while the Dumps had parts of the host coin visible. All the coins were numismatically interesting coins, with the exception of the 1887 five pound, which was a rather average VF piece that could definitely be improved. 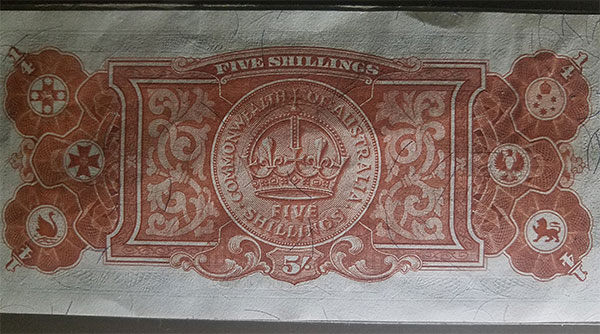 The reverse of an unissued five shilling or one crown note from George V. 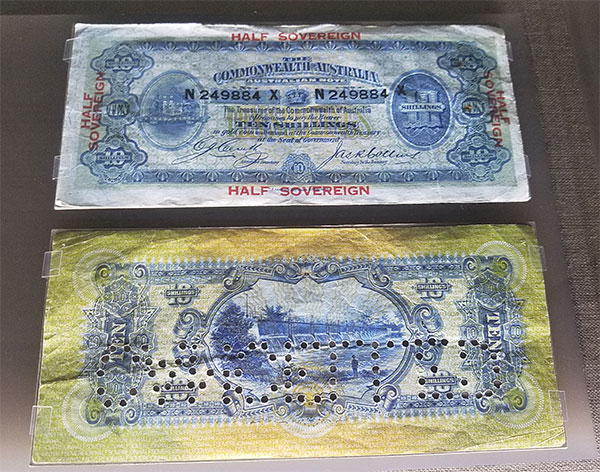 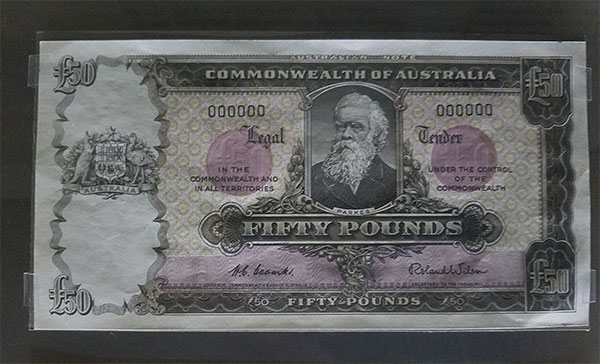 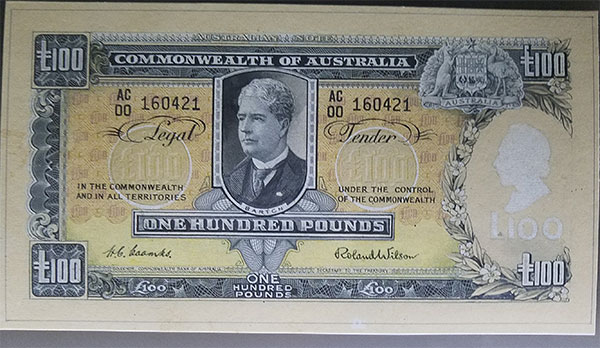 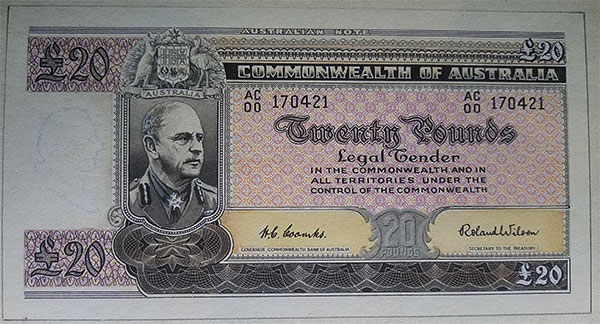 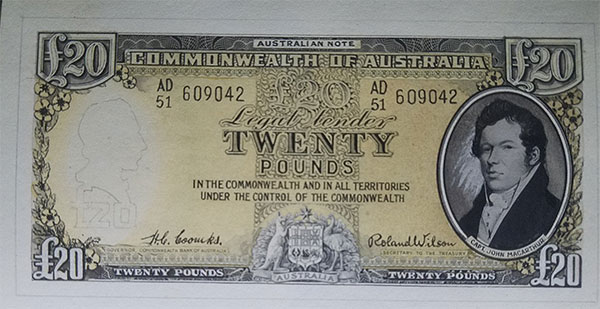 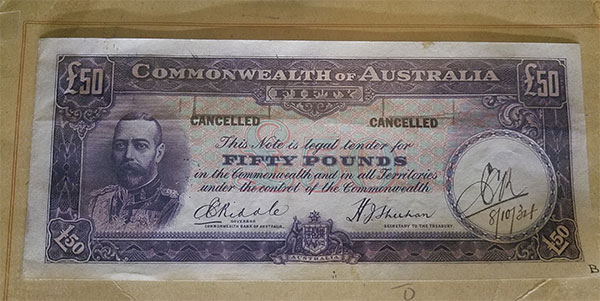 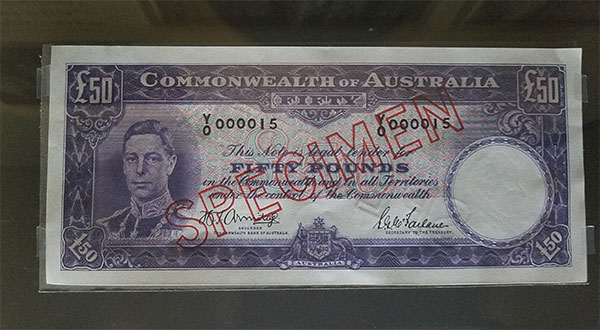 This pattern fifty pound banknote features George VI and is very similar to the previous pattern featuring his father.

The banknotes were equally as good, with most of the notes appearing original and unflattened. The pattern notes were especially interesting. I hadn’t seen many of them before, especially the decimalisation concepts, which I thought looked very Scandinavian. 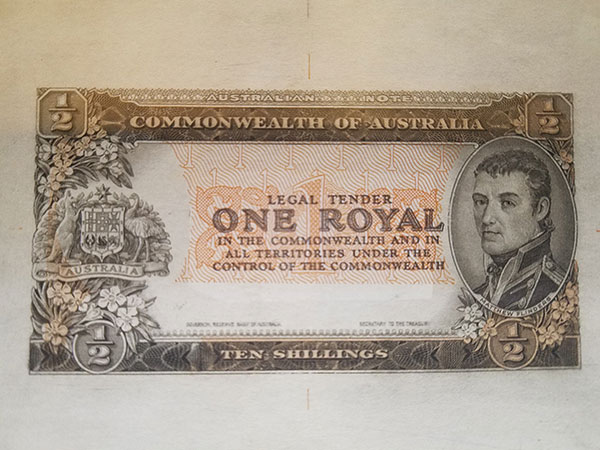 Had our decimal currency been called the Royal, this is what a one royal note would have looked like. 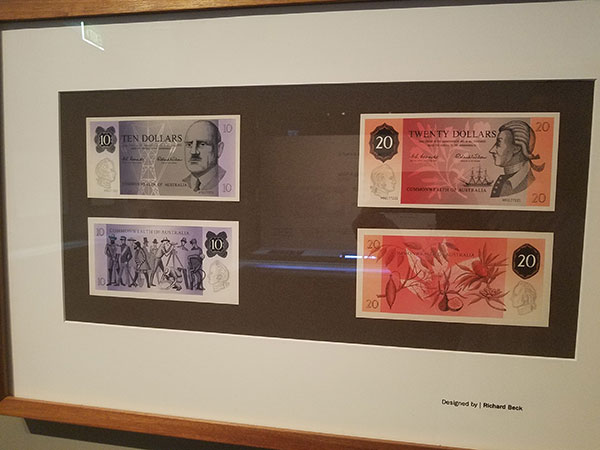 Some proposed decimal banknote designs from the 1960s. The final notes issued in 1966 look very different to these patterns, although the colour scheme is similar.

Overall, it was a pleasant visit and a nice way to spend a few hours on a lazy afternoon. 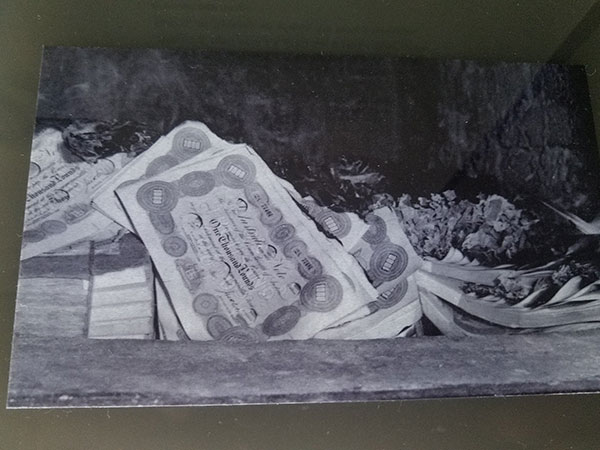 Bundles of cancelled one thousand pound notes being destroyed.

A tour of the Perth Mint

The Royal Mint Experience in Wales