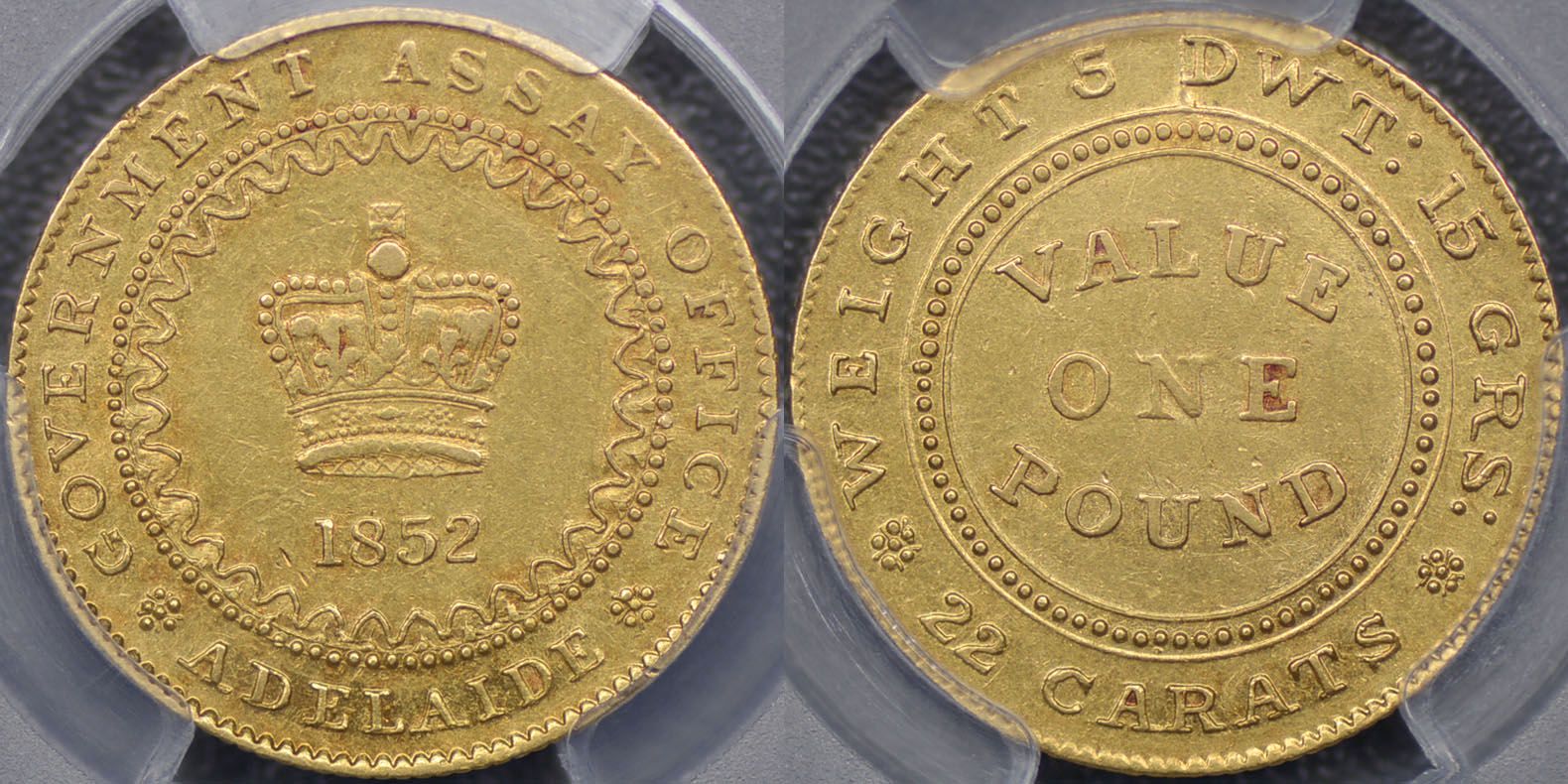 Australia’s first entirely locally-produced coins were struck in Adelaide in 1852. The story is well-known: With a desperate coinage shortage in Adelaide, and a confusing mix of gold ingots in circulation between banks, the provincial government in late 1852 passed legislation authorising the production of £1/2, £1, £2, and £5 pieces. From dies engraved by a local jeweller, the one pound coins were struck, and dies for the five pound pieces were prepared. Problems beset production of these “Adelaide sovereigns”, as they were known, right from the start, with the reverse die cracking early on and needing to be re-engraved. The original reverse die was very different to the re-engraved die, which had a crenulated inner ring (like the obverse) and sans-serif lettering. On the new design, the colons were also square, instead of round. The cracking of the die, plus the decision to re-engrave a different design for its replacement, means that today we have two types of Adelaide sovereigns, of two very different designs. The first type, described by numismatists as the Type I, bears the original reverse design, as well as the infamous crack through the “D” of “DWT”, while the second design is referred to as the Type II. Both coins are hard to find, but because production of the coin was stopped after the die crack was discovered, the Adelaide Pound Type I, with the die crack, exists in far fewer numbers than the Type II version. The exact number minted is not known, but several sources quote that fewer than forty pieces were made, and even fewer survive, especially in high grade. The example photographed above is in a high state of preservation, with lots of detail to the design, and only a few marks from circulation. There is light wear on the high points and slight weakness in the strike around the “N” of “ONE” on the reverse, but there are hints of lustre in the devices and in the legend to make up for it. Overall, this cracked die Adelaide pound is one of the nicest examples currently available on the market, and not bad value at this price point. The last sale of a similar example was in August 2019 in an American auction, where a specimen graded NGC AU58 sold for the equivalent of AU$94,000, while another example sold in January 2016 for about AU$145,000, also graded NGC AU58. The example on offer here, priced at $69,500, is great value by comparison, and one of the most affordable problem-free Type I cracked die pounds on the market. From an old Tasmanian collection.