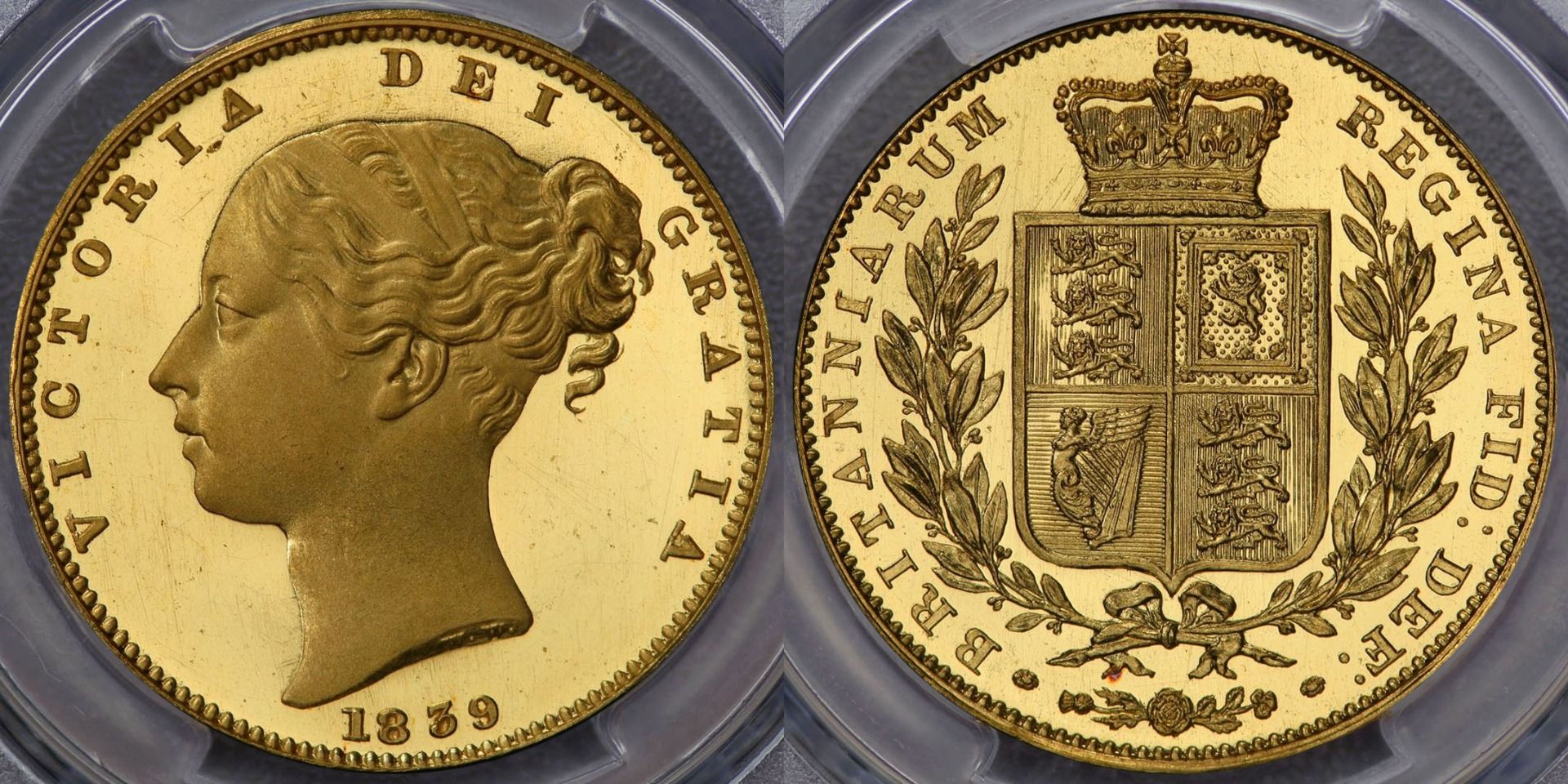 There are a number of beautiful special issues in the early British milled coin series. Along with rare dates and pattern coins, “commercial” proof coins have been amongst the most keenly-sought British gold coins in the recent years. I use the word “commercial” loosely, as many of these pieces were not made in commercial quantities at all. Some of these collectors proofs were issued in sets, others as individual coins, but their numbers were always low, usually a few hundred pieces of each denomination. The 1839 proof sovereign is no exception. While the actually mintage doesn’t appear to be known for certain, various sources state that 300 coins were issued in sets, with additional coins sold to collectors individually. Whatever its true mintage, only a handful appear on the PCGS and NGC population reports, with most in lower grade, many lacking even the “deep cameo” designation. Across this small mintage, there are three varieties: 1) Plain edge coins struck with dies mounted in upright orientation to each other, 2) plain edge coins struck with inverted oriented dies, and 3) coins struck with edge milling. The coins with edge milling are rare, the last example appearing in the Bentley auction in 2012, while the coins struck with upright and inverted die axes are very scarce, with the latter appearing to be harder than the former. London coin dealer Steve Hill speculates that the coins with the upright die orientation belong to the 1839 coronation sets, as it is a reasonable assumption that all the coins in the set should have the same die orientation. Since the five pound Una and the Lion and the crown were always struck with upright oriented dies, sovereigns bearing the upright die orientation must also be from the set. On that thesis, the coin photographed above is ex a coronation set. It is absolutely sublime, free from hairlines or fingerprints, deeply reflective, with undulant, unmarked fields, and a very sharp strike (as you’d expect from a presentation proof coin). There are die polishing lines in the fields, indicating an early strike, while both the kiss curl on the obverse and the Irish harp on the reverse are fully struck up and present. Being the second-finest example graded by PCGS (5/20), it’s difficult to track down sales data, but the example graded PCGS PR66DC sold for US$37,600 in 2015. If you’re looking to add a superior proof gold sovereign to your collection, or would simply enjoy owning trophy coin in high grade, this is your coin.